"I get up every morning determined to both change the world and have one hell of a good time. Sometimes this makes planning my day difficult." - E. B. White

I have found that a MAJOR part of my personal well-being exists inside my desire to have fun and be a happy person.  That sounds very simple but I believe it is a decision to wake up and live a happy life even in the worst of circumstances or when life happens and slaps you across the back of the head like it did to me recently.  It's not all mental, I am armed with some helpful tools - I have a highly inclusive sense of humor and love meeting and talking to people.  I laugh a lot.  And not chuckles or giggles (although those find their way in as well) but loud, boisterous, throw my head back laughs that make my sides ache.  I don't take myself or my surroundings too seriously and it has helped keep me grounded, happy, and confident.

The story I am about to tell you is 100% true and happened to me personally. On a recent work trip, Murphy's law showed up and showered me with what I can only tell you wasn't rain and I had to decide how I was going to handle the surprises and what I would do in response to maintain my spirit.

The day started off well enough, but the moment I stepped into the airport to get home things took an immediate turn for the worse... First, my flight was delayed and there would be no way for me to get home that night.  Because it was a weather related delay, the airline wouldn't pay for me to have a hotel and weren't very helpful in finding me secondary options.  Second, my debit card strip had become demagnetized so no machines would read it.  So basically, I was stuck in an airport at dinner time knowing I was going to need a hotel in another city with no cash of any kind and nothing to do about it.

The debit card part was a challenge I certainly could have done without at this point and of course, I found out about the strip being demagnetized only AFTER I had ordered a salad at Saladworks and was now getting angry looks from the customers behind me...  Two people back, a older gentleman steps out of line with his wallet in his hand.  He immediately put his arm around my shoulder, squeezed, and said, "I can tell your day isn't going so well, how about I cover your dinner."  He refused to let me take his information to repay him and after I got my salad, he disappeared into the crowd saying only he didn't feel like a salad, he was more of a "pizza guy".  Redemption one.

While eating my salad outside a bar/grill in the airport, I notice a couple start arguing inside.  It should be noted that there was what I would guess was a one-year-old baby with them.  The man, who I will from here out refer to as DB starts yelling and it is obvious this is probably something that happens quite frequently in their household.  I give him a look, he meets my eyes and gives me one of those, "what are you going to do about it" faces and continues berating the woman.  A guy sitting next to me, takes his iPod buds out of his ears and we catch eyes for a second.  I can't believe how this is playing out and neither can iPod guy who  I later found out is named Dean, and who couldn't be bigger than 5'9" 145.  He looks directly at me and says, "So, what do you think?"  I say, "Honestly, I think I'm about to go over there."  He nods his head in agreement.

He gets up and walks over as now DB is standing and making a scene... Dean is very cool and I can't hear what he is saying when all of a sudden, there is movement and DB is on top of Dean.  I jump over a booth to span the distance and get between them.  They stop almost immediately, a crowd is gathering. The cops arrest DB and Dean and I talk for a few minutes before he gets his backpack, puts his ear buds back in and heads off to get on a flight to Houston.  The booth jumping lands my shoulder in a new wave of pain but redemption two for Dean.

At this point I head towards my new gate.  As luck would have it there is a small bar immediately inside the gate and while the bar is looking good, I have no money to my name to get a drink.  I sit down and the bartender asks me what I want... I tell him I'd LOVE a Pinot Grigio but explains I have no cash.  After a quick rundown of my day he wordlessly gets me a glass and pours me a tall Pinot Grigio and walks away with a wink.  Redemption three.

While sitting at the bar, the fire alarm goes off and we are all required to leave the airport and proceed to the nearest exit and outside.  I'm wearing a thin long-sleeve top and freeze outside for fifteen minutes before being herded back inside over the false alarm.  My new best friend, the bartender, (who had not left by the way) had a fresh glass of Pinot waiting for me.  Redemption four.

I finally get to my next stop - at nearly 11:30 PM and have no hotel room yet.  My amazing mother comes to the rescue and 15 minutes later I am at the Best Western getting a room key.  I ask for a food menu and am told that the bar is open and is serving food so I walk down and a group of people is already there telling their horror story of a flight that they boarded twice, took off once, only to turn around and get reset for a flight in the morning.  They, however, had gotten vouchers for food so they generously shared them with me and even bought me a couple drinks.  We had an amazing nigh, shared some laughs, and at the end of the night went our separate ways.  Redemption five. 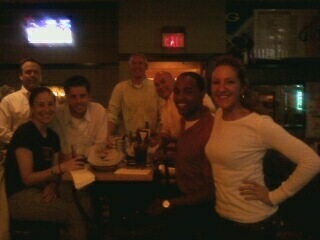 On a night where everything seemed to be falling apart, I was presented with people and situations that made it worthwhile and not so bad.  I was humbled by the kindness of the strangers that helped me when they didn't have to, self-lessly helped others when it put them in danger, and even made room at a busy bar table to let me join in the fun. 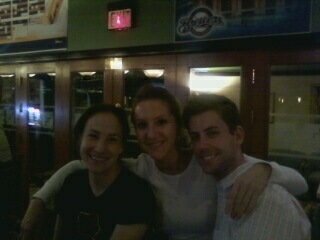 I'll probably never see any of those people again, but I'll never forget that night or how each of them made my load a little lighter.  I am forever grateful.  Meaningful experiences, even between strangers can have a lifelong effect and the lesson wasn't lost on me that night. And really, I can't complain because despite everything that happened, at the end of the day, my stomach was full of food (and wine), my heart was light, my trademark laugh had left my sides aching, and I had a great story to tell when I got home.  I got to my room that night, crawled fully clothed into a warm bed and was asleep almost instantly... and if I had to venture a guess I'd say I'm pretty sure there was a smile on my face.
Email Post