“Pain is temporary. It may last a minute, or an hour, or a day, or a year, but eventually it will subside and something else will take its place. If I quit, however, it lasts forever.”  -Lance Armstrong

When I thought about the first race of my season a few months ago, this race, I was excited for the event and logged many, many miles knowing that this run would kick-off my spring.  As an endurance athlete you get used to pain, injuries, and running at less than 100% but this week was mentally and physically challenging.  I was plagued with painful, swollen legs starting early in the week, effectively keeping me off the track.  Monday when I tried to get on the treadmill my calves and shins swelled up and were too painful to run on that day or for two days after.  I didn’t run most of the week, minding the swelling and getting cardio in the pool and on the bike but I did clock a 95 minute run just yesterday and while the pain was better, the run was timed a day before the race which is generally not recommended for racing.  So, on top of the injuries my legs were fatigued from the long run.  My brain had also failed me on this one because I also didn’t have a bib and a chip so if I ran, it would be without an official time and that is hugely disappointing. I knew that if I could manage to run, it would be without an official time and it would probably be painful on tired, swollen legs.  I had about 5 hours to decide.  My lungs were strong and I always perk up on race days so I thought it may just work out.  Either way, if this run happened, it was going to be interesting. 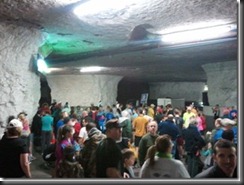 event three hours from here.   When my alarm went off at 4 A.M. I had only been asleep for about two hours, I had been working on some articles for work until really late, and I wasn’t sure I could get myself out of bed let alone get myself to a race!   The drive down was fun and in my mind with the shin problems I had been battling all week, I wasn’t sure I could/should race.  The clock was ticking… only two hours or so for me to decide now but in the back of my mind the excitement was growing.
Meeting us there were  Trish, Tony, and Melissa from team and another 3500 runners from all over the area converge in an underground cave that is a cool, temperate 65 degrees so it would be a comfortable climate to run the 6.2 miles. The 5K race kicked off at 9:00am and the 10K at 10:00am (that makes it easy to remember!).  As we watched the 5K runners take off and talked to other excited runners, I knew what I wanted to do… it was race day after all.  I told Jim I was all in.  I didn’t want to regret not giving it my best shot and seeing what I was made of!
Both Jim and I ran the 10K and neither of us had our best runs, but we were pleased with logging the miles and the training!  I finished in 46:20 (7:26 min/mile) not my best time but I'll take it and Jim finished in under 50 minutes pleased with his performance as well.  My first mile and my fifth mile were tough, but the other miles felt pretty good and I felt good about what I was able to do.  Like most running events, this one was fun and Jim and I captured some of the memorable moments with audio and visual content.  Definitely a race worth doing again and I’d love to see how I could run that race healthy and rested.
Tony, Melissa, and Trish finished in good time and joined us at the end of the race for a team picture.  I was really proud of my running family today!  Great way to kick off the season and if today was any indication then this spring promises to be full of fun, fast racing… bring it on!  Next stop for several runners in the Omaha Mud Mafia crew is Trek up the Tower in February and the Leprechaun Chase in March!
You can here all the details in both the YouTube videos and the Podcast we did while in the cave! If you are a runner at all, you will understand the excitement on race day!


Wrapping Up After the Run!
Complete results for the event can be found at HERE
Mud Mafia Blog is at http://themudmafia.blogspot.com/ on Facebook
We would love to get your feedback on this special show at podcast@theaverageguy.tv the official podcast of the Mud Mafia and Leaving a Path.
Email Post
Labels: Mud Mafia Podcast Rest running Training