There is a silent pace killer out there.  It's real and it's plaguing races of all distances and disciplines across the globe systematically adding precious seconds to would-be PR's around the world.  Until recently, this epidemic had no name... it just was this thing no one wanted to talk about but no one could continue to ignore.  But, thankfully, now we have a term, a name for this problem and I will not stop until it has flooded the social consciousness and brought a much needed light to this topic. (and much like my disdain for Prefontaine style shorty-shorts on male distance runners) I am going to openly discuss his nameless killer...it's nameless no more... it's CLOCK BLOCKING.

What is Clock Blocking?
In endurance sports Clock blocking is when a person either deliberately or inadvertently disrupts another racers flow or stride causing their pace to slip and thus directly hurting another racer's overall and/or average times for their respective event.

Disclaimer: Now, don't get me wrong, there is a normal amount of positioning at the start of a race as runners take off and the pack thins over time.  This is normal, but there are "other" circumstances that constitute legit clock blocking during an event I'll cover in more detail below.

Where did the term Clock Blocking come from?

Jim Collison and I cannot take credit for clock blocking itself, but we coined the phrase while doing a 16 mile run at a lake when we accidentally stepped in front of an approaching runner, our friend, Laura who was training for Boston forcing her off her path, out of her stride and probably taking a good 2 seconds off her training run time.  We were lucky it was just a training run, had this been the real deal we could have cost her the Boston qualification.  This is a game where seconds count and our mindless chatter about whether Fresca was better in its original form or with Black Cherry flavor could have had catastrophic, unforeseeable consequences on race day.  I pronounced Jim a "clock blocker" and thus, the term was born.

Who is a Clock Blocker?
I know what you are thinking... "I'm not a clock blocker.  I am fast.  I don't do that." au contraire mon frere. Unless you are the leader with a sizable margin (so if you are doing the math that's ONE person per race) you could, in fact, most likely you are a clock blocker or occasionally engaging in clock blocking activities.

In fact, I suppose some of you have even engaged purposefully in the act of clock blocking to gain position or to try to prevent a pass (Elites, I'm sure regularly engage in this act, one example might be male elite athletes deliberately clock blocking female elites to avoid being "chicked" a topic recently brought to my attention which will be discussed in another post).  Bottom line: If there are runners behind you, you may be a clock blocker.

When is Clock Blocking a problem?

Clock blocking is always a problem.  We all have been behind the runner updating their Facebook status, tweeting their splits or rocking out to their headphones (and usually in events where they aren't allowed) oblivious to the fact that they are in the center of the lane forcing runners to maneuver around them to the right or the left losing precious milliseconds and energy in the process.  Or the 10 mile pacers who routinely line up with the front packers who run sub seven minute miles forcing about 25% of the runners behind them to pass them within the first 1/2 mile.  Or the clique runners who chat three across, forming a veritable wall that may force you to slow first and then move around them as they chat about their newest running shoes that match their toe nail polish or the $100 racing visor they bought for the event and how their compression socks make their calves look thinner.

Is Clock Blocking ever okay?
I've never found myself in a scenario where deliberate clock blocking is reasonable, but I've never been racing for money.  I don't get paid, and while I routinely finish high in the normal pack of runners, my deliberately slowing someone down isn't going to change much and I don't subscribe to that brand of douchery.  However, I imagine if you are an elite or a professional with money or major sponsorships on the line, this many be a necessary evil from time to time.

What can be done?

Pay attention for crying out loud!  Don't start at the front if you run 10 minute miles.  Follow pacers. (Pacers are signs with numbers on them that indicate per minute mile pace, so an "8" would mean the runners behind that sign run 8 minute or so miles.)  If there are no pacers, use shorty shorts as your compass.  If a dude is wearing shorty shorts, especially if his legs are also shaved, and you are not shaved or in shorties, and he's standing next to you, move back about 10 rows of people.  He's probably faster than you. The shorty shorts don't make him cool, and more than staying out of his way, you don't necessarily want to even associate with the shorty shorts crowd.  I'm not saying they are bad people, I'm just saying, "wear longer shorts, guys.  I don't need to see all that business."

If you are not going to run the race at all, and that's totally cool - walking is rad - start in the back.  If you are a lone wolf runner rocking out to Run DMC or Journey, don't run down the middle of the course unless it's as wide as a four lane highway, and if you run socially with friends, adopt more of a Mighty Duck's "Flying "V" formation" to avoid creating a wall of annoying denseness for the runners behind you. 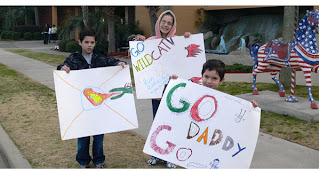 If your adorable kids are holding a sign, or your friends or co-workers are screaming your name and you see them, by all means, wave like an idiot, but don't stop or drastically slow.  Someone will run you over and then those adorable kids cheering for you will watch their mother or father get trampled.  No one wants that and they will need a lot of therapy.

If your race has a turnaround on a narrow course, run single file and to the right as the Speedy Mcspeedy's start hurtling back in your direction. (Even if all you want to do is stick out a shoe and trip them since you haven't reached mile 4 and they are blazing through 9 effortlessly.)  If you blow up at mile 17 and need to walk or puke or puke-while-walking.  Don't stop abruptly, seizing your sides and put your head between your legs... slow down, move to the side and then throw up as much as you want uninterrupted.  In fact, a bystander might even hold your hair and rub your back. Aces!  If not, when we see you later, we'll all remember and we'll make fun of you and give you a nickname like Pukes-a-lot that will follow you to every event thereafter.

Why am I telling you this?

For new racers, old racers, oblivious racers and even my own temporarily slow self right now as I recover and get faster again, we need reminders, albeit somewhat tongue-in-cheek ones, that we are sharing a course with thousands of other runners at all skill levels and abilities and different race day goals.  Be mindful and respectful of that.  Most people just don't know they even do it.  I mean, have you ever SEEN the start to an Ironman?

Does two seconds matter to me?  No.  Not even a little bit, especially right now as I train through some injuries, but there are times when it does.  Should two seconds count to most of us?  No.  Probably not a lot, but it's not for me to decide what matters and what doesn't.  Each event brings people together to run their race and courtesies we can extend one another as racers are always appreciated.  Clock blocking doesn't have to happen.... you don't have to be a clock blocker.  Let's work together to bring an end to this debilitating epidemic and while we're at it, let's try to do something about the dudes rocking the shorty shorts...

Clock Blocking is flooding the social consciousness as we speak.... We have a website - http://www.clockblocking.com/ come tell your clock blocking tale on FB The Clock Block on Facebook  I won't stop until this is in a Nike commercial or a documentary.  Join me.
Email Post
Labels: clock blocking face book ironman nike racing shorty shorts