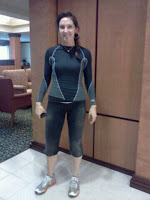 On a cold, dark, wet morning, over a thousand miles from home, while horribly under-dressed and with a fractured foot in the mountain trails of Southern California I became part of an experience that would help define me as an athlete, would challenge me with every rugged step and ragged breath, and would earn me the right to proudly proclaim myself a Spartan. I didn’t know the significance of that when I boarded the plane in Nebraska the night before or even that morning when the gun went off. Now, eight hard miles later I knew I’d never be the same competitor after taking on the Super Spartan obstacle race.

Race morning was cold, and I’m from Nebraska, I’m used to the cold. In the backdrop of the Vail Lake Resort grounds of Temecula , mist was rising off the mountain peaks which meant snow was falling. My thin thermal gear would never be enough in this weather, going faster would be how I’d warm up. On top of the cold it was miserably wet too. The rain fell in sheets, then in a mist, then in sheets again. There was even hail, and the grass was a puddled mess. My feet were soaked long before I got near a water obstacle and my light unstructured shoes were an obvious miss for a tough trail run. If the mountains were as brutal as they looked from the valley, I might in trouble. 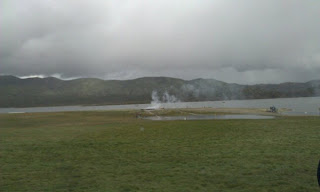 Waiting for the start is a dangerous time if you let your thoughts wander. The gravity of the unknown began to sink in for me and an unfamiliar feeling crept into my consciousness, uncertainty. I was thousands of miles from my familiar trails, running a different kind of race, I was on my own and I was unsure if all the training I had been doing would translate here and if the recent news of a stress fracture in my left foot would prove problematic. I pushed all that from my mind and headed out to the start line. After all, I ran six days a week, 16 miles or more every Saturday as of late. Despite the conditions, and without knowing any better, I was confident.

The starting line just before a race is electric for me. And like every event I’ve done before, in these final moments I centered my thoughts. The familiarity of that was comforting. My conversational chatter turned to tunnel vision, focus, and my thoughts only on the event ahead. I was slated to run with wave one and I was also going to run alongside Joe Desena, the creator of the Spartan Race. Having met him only hours before I could only assume why he headed out to the starting line with an axe in his hands. “I’ll be out on the trail all day.” He told me, “and I’ll probably run it backwards at least once.” He ultimately did spend all day on the trail running, directing traffic, and motivating runners, a garbage bag acting as makeshift poncho in the downpour. We were the first group to go through the course and as we took off down towards the water and then up the hillside past the waiting waves of runners and out of sight, I had the ominous feeling that this was like no race I’d ever done before and I was about to find out firsthand just how much I could handle.

Immediately the trail asserted its resilience. Despite the picturesque backdrop of a mountain lake surrounded on all sides by towering, rugged hillsides dotted with green bushes, thickets, and small pines the course was not to be underestimated. It was beautiful but unforgiving and admiring the view for too long could prove dangerous. I realized, even as a fairly experienced trail runner that this course would be daunting. Winding treacherous hills up into the clouds were matched by the steep, slippery gradients back down to Earth. Long rolling stretches along the hilltops overlooking the lake and surrounding land gave you plenty to look at but you couldn’t site see for too long because though well-marked, the trail was along wild narrow expanses and one misstep would have found the unlucky racer tumbling down the mountain. I gauged the passing distance in my head focusing only on the shoes of the runner ahead of me, nimbly bounding around puddles and bushes, through muddy patches and over rocks. It took all my focus to maintain balance on the trail and at the base of a deep hill and around a bend stood the first challenge, narrow balance beams in a zigzag. A lifelong dancer with excellent balance I thought it would be easy but after three unsuccessful attempts and 30 penalty push-ups I finally got across. As I passed Joe, who had been watching me struggle through it he called smugly out to me, “Not as easy as it looked, huh?” as though he’d been reading my mind. And so that set the tone for the rest of the course.

The hills never let up. Dizzyingly steep at times they seemed to climb, the rain making the trail muddy and sloppy to navigate without spikes. Stretched between the monster peaks and dense trails were more brutal obstacles one more intense than the next, never predictable requiring more than strength – balance, dexterity, problem solving, and speed. The obstacles made no gender or body types advantageous. They were equalizers. Taller, stronger men would scale the walls nimbly and easily ahead of me but I would pass them on the hills or under the wires and through the tires, capitalizing on my smaller size and speed. Creative and sadistic, each challenge was designed to test the competitor and I soon found myself struggling in exasperation as I hauled my frame up and over walls, through tires, under fences and then through a 100 yards of muddy water on my belly. After hoisting a cinder block fifty feet in the air, I was instructed to fill up five gallon buckets with water to haul around in waist deep water. This was after 100 yards of a barbed wire path so low to the ground my cheek was grazing the muddy ground.

Near the end of the course was a slippery wall to climb with a knotted rope but only after I solved a rubic cube puzzle. My mind and body were engaged completely during my time on the course. There was never a moment where I could let up, exhale or catch my breath. If you failed the obstacle there were penalties, generally push-ups and after paying your penalty you were made to try again until it was completed. There was no easy way through. And even though it was competitive, racers encouraged, collaborated, and pushed one another forward. After all, forward was the only way to go. Climbing hill after hill my legs were on fire.

As a seasoned racer, I admittedly didn’t know how to even begin to tackle some of the obstacles when they appeared and what I should do with my pacing in between. It was like being in new territory constantly recalibrating, thinking quickly, and making adjustments on the fly. At one point at what I can only estimate was about halfway through and in the deepest part of the trail I felt my injured foot buckle and wincing through the pain I knew there was only one way off the mountain and I had to just keep going. I pushed forward and I went faster. If you didn’t attack the trail it would eat you alive and you couldn’t help but respect the harshness of the course the deeper you went into the event. It was like a living breathing monster that nipped at your heels, pushing you harder and faster than was comfortable, but comfort at this point was miles away.

I wore a hat for the race and silently was thankful. It obstructed my view at times forcing me to focus 100 yards at a time or 10 feet at a time and sometimes that was all I could handle. Screaming down a hill and through the fog at the edge of the lake, the finish line finally materialized. Calling on one final burst of speed I was past the last obstacle – Spartans with clubs that stood between the runners and the finish. In a heartbeat I was over the line. I was exhausted, my chest heaving, my pants torn, mud across my face and underneath my fingernails. I barely felt the medal go around my neck when the volunteer placed it there. Mud was splattered across my jersey and pants, bruises were already rising on my shins and knees, and my shoes were destroyed but I was done. I was exhilarated and I was humbled.

I sat in the wet grass, and let go of a breath I didn’t realize I’d been holding since I finished. For most races, the finish is just a flash, often times even anticlimactic and ordinary but today I felt different. I didn’t know what I’d find when I got on a plane and flew halfway across the country to race the Super Spartan. In that moment looking out over the water and into the hillside, I knew that what I had been looking for was about how I felt in this moment. I showed up that day a runner, a racer from Nebraska, I left that day a Spartan.
Email Post
Labels: racing running Spartan Race Training