Yesterday was a day for me.  I had some majorly cool stuff happen and some majorly shitty stuff happen too.  I started my day in a dead panic thinking I was running late for a triathlon... I was riding a bike I had never ridden before and my rotation would be compromised by a recent injury.  Injury aside, not important.  I am so sick of that.  I am so sick of being hurt it feels like an excuse I don't need. 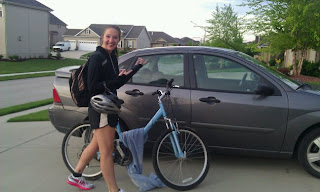 Yes, I have a fractured rib but that’s nothing – truly that’s not what this is about.  It’s about coming back.  It’s about doing what you can with what you have and not giving up even if giving up is easier.  Everyone I know right now is hurt or ill-prepared and racing anyway.  Racing further, harder, faster than me.  So no excuses.  No easy button.   Easy is bullshit.  Easy isn’t the answer.  I’ll take ugly, awful, broken but I won’t take easy.

So, my race day began…

It felt good to know I was racing.  I love race days.  Truly, I wasn’t nervous.  Nervous isn’t the right word for me.  I was concerned but I was confident too.  I’m a lot of things, but I’m pretty tough too.  Race days are beautiful.   I love the vibe, and the amazing energy given off by the other racers.  When it’s crunch time I’m ready and I’m resilient.  I am committed.  I am tenacious.

While waiting for my dad – my ride overslept and my bike didn’t fit in my car I thought of so many things.  I looked at pictures of my daughters – neither of whom were there. I thanked God for the sunset I got to watch from my neighbor’s driveway. I wondered what my girls would do as adults in my shoes.  I thought of what I’d want them to see if they could be there.  I was overwhelmed with all of that for a moment.

The venue was amazing.  There were hills, lots of them, the volunteers were friendly, the racers were excited.  The air was electric.  I was subdued by the weight of it all.  This event was special a women’s triathlon and the first for my town – all women triathletes, near my house, routes I run, this was familiar turf.  Not mine, but mine-ish.  The murky water was 64 degrees – I can’t complain.  I had a 3ml suit, lots of compression, insulation and decent buoyancy for my side.  Given the situation, it was as good as it gets.  I had friends around, I had family supporting me, I just had to let the gun go off and I had to respond. 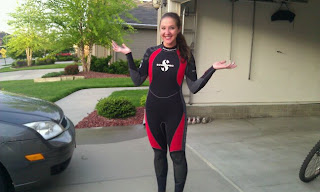 It was windy, choppy, but it could have been worse.  Going into a race not at 100% is interesting.  Being knowingly deficient without knowing how that will play out when the adrenaline hits is a humbling equalizer.  It could be no big deal, it could be everything.  I had my wet suit pulled down halfway in the transition area and I eyed the course I organized my stuff 10 times.  I joked with friends, I stretched.  I thought of my two babies and I prayed to be a mom that would make them proud.  Mostly, I eyed the damn water.  A half mile is an eternity of rotation when you can’t turn your body to stroke.

Swimming is my worst event anyway, but now it was an unknown and it was a looming obstacle that was heavy and it wasn’t lost on me.  It wasn't a matter of finishing.  I would finish, but would I be happy with the performance?  It wasn’t a matter of comfort.  Today was going to hurt.  No joke, I stared at the water for 40 minutes.  I didn’t know how rotation would be effected and I sized it up, took it in, and hoped for the best.  It wasn’t Everest I was climbing, it was my pride.  I wasn’t worried about a DNF, I was worried about being chipped, being recorded, being so deficient.

We lined up, got in the water, which felt really good actually.  My suit was perfect and when the buzzer sounded and the water came alive in motion – I was lost to the movement, the familiarity of the stroke.  It didn’t take long for the pain to overwhelm.  At about 100 yards, I thought I would throw up and I had to fight for every stroke on the swim and it hurt. Halfway through I pulled up momentarily.   The water was choppy, every rotation on my left side was ripping pain and a volunteer in a kayak saw me hesitate and said, “You okay?”  I looked at him, his concern, felt my side and scanned the horizon.  I didn’t see my friends or family, it didn’t matter anyway.  This was happening.  There wasn’t another option.  I lived a lifetime in that moment answering him. The thing about that though, is that it felt good to hurt and do it anyway. 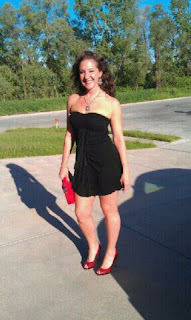 I wanted it pretty bad that morning and I got the job done.  It wasn’t pretty.  It wasn’t awesome.  I didn’t finish in the top 5%.  I got a medal, I got respect from my friends and racers that knew me, saw my face when I finished knowing I could have done better, but didn’t and appreciated what that meant.  My friends who respected my disappointment but reminded me that it didn’t really matter.  Coulda woulda shoulda.

I didn’t finish where I wanted but I finished and this is just the beginning. I was galvanized in it. I was reminded how I kind of liked being an underdog because that’s where you are just trying to stay in it and no one thinks you can.  No one expects anything from you.  But you know better.  You know what’s possible and you do it anyway even if it sucks.  And you don’t let it matter (well it mattered for a minute but then you let it go and left it on the course). And then you go home and you put on the tallest heels you can find and the hottest little black dress in your closet and you go out with your friends and dance for hours.