My Marathon… Well, Half of One Anyway…

I had the best plan for the marathon today.  26.2 miles split up into two races.  I was racing with and for two of my best friends.  Today was never about me and it ended up that way.  From the honor of bearing witness to greatness to the devastation of feeling helpless…

I have two main training partners – Jim and Casey.  Good running partners are hard to come by and I truly have two of the best.  They become more than people you run with because you suffer together, laugh together, accomplish together, and fail together sometimes too.  It’s a balancing act and both Casey and Jim have carried me when I have needed it and let me push them when they were struggling.  Family.

“Many of us spend our whole lives running from feeling with the mistaken belief that you cannot bear the pain. But you have already borne the pain. What you have not done is feel all you are beyond the pain.” – Bartholomew

Casey was registered for the half and wanted to finish in under two hours and Jim was registered for the full and wanted to finish in under four. Their goals were my goals and I couldn’t be happier about it.  I had registered months ago in anticipation of doing the half and running for broke, but through a chain of events including injury and illness, I had to change plans so I thought I’d just add some mileage to the day so I could run with my friends..  It was actually quite perfect.

I wanted to run the half with Casey, cross the line and then head back out and finish with Jim.  Air tight, right?  It didn’t work out that way today, there were extraordinary moments of triumph and shallow moments marred by disappointment.

It started at 4 A.M. when I woke up with the stomach flu…

I was sick for nearly an hour… not the nervous kind of sick but the sour stomach, chills and shakes kind of sick.  My younger daughter had been ill earlier in the week and here I was on the bathroom floor two hours before my race was set to start and I was a mess.  I went to my room, got my clothes on and drove to Casey’s house anyway.  I’d just have to try.  Casey made me dry toast and gave me a banana and we set out.  She was nervous.  A horrible blister had kept her from running for two weeks and it was still pretty tender to the touch.  We were unusually quiet on the way down to the race, I was still trying to calm my stomach and she was trying to calm her nerves.  Things were not looking good. 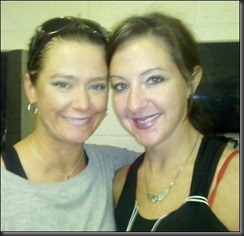 We parked and headed out to the coliseum, we were late because of my being sick so we didn’t get to meet up with our friends and racing family.  We headed out to the starting line with just a few minutes to spare and neither of us was sure what the next 13 miles would look like.  My stomach had calmed, races have never really gotten me nervous, they have actually had more of a calming effect on me and as I lined up alongside 10,000 other runners, I wanted to enjoy the experience.

Casey and I lined up with the 3:55 marathon pacers – 9 minute miles.  The cannon went off, we shuffled forward and we started our run.  It was a beautiful day.  After a mile or so, Casey and I settled in and started to really enjoy the race.  We interacted with the crowd as we ran – lots of high fives from the kids lining the street.  It turned out to be a really good run for us both.  I felt really strong and I thought I could easily get to 26 today and in good time.  My splits were captured at the 5K, 10K, and 15K.

I lost Casey around the 11 mile mark and ran the last two around 7:12’s. My legs and lungs felt great, I did have one moment 10th street when my stomach acted up, but I got sick on the fly and it was only water anyway so it didn’t slow me down.  I can honestly say that was a first.  I’ve gotten sick before, but never while running.

I crossed the line and Casey rolled in about 2 and a half minutes later.  When I saw her come into the stadium, it was a really emotional moment  Over the past several months we’d logged so many training miles together, countless laughs, injuries, disappointments, motivation, and ultimately a friendship that I have come to treasure so very much.  Today wasn’t the first time she and I finished a half marathon together. There was the day we ran a half at our gym, 109 laps around marked only by a finish over an invisible line with no crowds, no cheering, no water stations, no gels.  Just us.

There are moments in your life that are indelible, very nearly impossible to describe because of the depth and intensity of the response and emotion.  Moments that will never be forgotten.  I was standing by the finish and I saw Casey come out of the dark tunnel and into the sunlight.  She ran down the 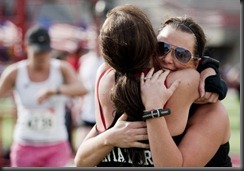 finish line and that moment seeing her cross the line took me back to the first day we ran together when she was so unsure of herself and this morning in the car, so anxious for what lay ahead but now this woman was full of confidence and strength, smiles and tears.  She was electric and alive.  I knew that she’d never doubt herself again.  Not after today.  The tears began to flow.  A local photographer from the Lincoln Journal Start happened to capture the moment of us celebrating together and this moment will be one I’ll always be be honored to be a part of as a friend and as an athlete.

The second half of my run was set to start, but it wouldn’t happen.  When I left the stadium field I wasn’t allowed out on the track through the back door and the front door was so jammed with people I was forced to climb a fence and slide down a wall to get out.  The whole process took almost 20 minutes.  I sprinted the 1/2 mile to the course, now my tears out of frustration, and by the time I got there, Jim was long gone.  I waited another ten minutes.  I couldn’t catch him if he had 15 – 20 minutes of a lead.  I was beside myself.  It’s not that Jim needed me there, or that my being there would change anything but I wanted to finish a marathon with my friend, I wanted to log 26.2, I wanted to see him reach his goal. 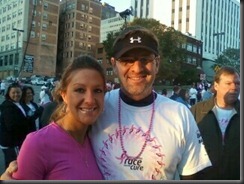 Jim and I have logged a lot of long run miles together.  Two runs two weeks apart recently that couldn’t have been more different, one where I fell apart on a 20 miler and one when I had a breakthrough.  I have been thankful for his support and friendship – he’s like a big brother to me.  When I left the course today and walked to my car, the weight of the day was heavy and I was suddenly exhausted.

Today has been emotional, heart-breaking and awe-inspiring… but I ended the day with the same two friends and running buddies.  I’d say that’s a win by any standard… thank you to you both… I would be less without you.