In my life traveling and covering and participating in different races, I’ve made some incredible friends.  One of them is the woman I feature in this blog post – Alyssa Tokorcheck – who I met and ran a half marathon obstacle course with last year when we finished the Spartan Beast in Vermont as a team.  Since then, we’ve stayed close and she recently took on a Spartan Sprint in the Carolinas and kicked some serious ass. 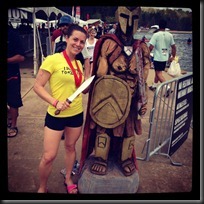 Alyssa Tokorcheck has some new hardware to add to her collection.  She took home a second place overall finisher sword from the Carolina’s Spartan Sprint on Saturday while rocking the Spartan Chicked gear.  Traveling to the Carolinas from PA with a team of athletes from her home gym, Hybrid Athlete,  this isn’t the first time Tokorcheck has traveled for a Spartan Race but it was her first top three finish and this Spartan Chick trains hard for her success.

Alyssa was part of the first Spartan Beast in Vermont in 2011 running alongside three of her friends (myself included.)  Her domination of the Carolina’s Sprint comes as no surprise to those who train with her at the Hybrid Athlete facility in top ten finishes for ALL of the athletes that traveled South for the event that included Tokorcheck, Mike Russell, Youssef Mkwi, Brian Teyssier, Nikki Hurtack, and Jodie Kathleen.

Tokorcheck has also completed her first ultra this year and plans on applying for the Ultra Beast this year in Vermont.  Of her Carolina’s finish she says, “I'm still pinching myself, honestly.  I didn't go into the race with very high expectations because I had to take almost four months off from running after the knee injury I got at the ultra.”

During the race, Alyssa focused on keeping herself moving and as she progressed through the obstacles, she started to hear how she was doing from volunteers, “About four miles in, one of the volunteers told me that I was only the second woman to come through the obstacle, and I kind of laughed him off thinking he was mistaken.  Then the volunteers at the next obstacle told me the same, and it definitely gave me the motivation I needed to really push myself through the last mile.”

It wasn’t an easy second place finish.  Tokorcheck battled with the third place finisher all the way to the end, “The girl who finished 3rd and I were taking turns passing one another since the barbed wire crawl, and it ended up coming down to the spear throw.”

Her training has helped her be successful in a variety of events. “I train for literally everything...strength, speed, and endurance.  I'm not exceptional at anything, but I strive to be good at everything, and I think that is what makes me competitive at obstacle racing.”

Tokorcheck changed up her routine after the grueling Vermont Beast.  She says, “After the Beast, I spent a lot of time working on getting stronger with my new best friend, the barbell.  Running was always my passion, but lately I've found a great satisfaction in picking up really heavy things, so now I try to split my week between CrossFit and running.”

Tokorcheck’s trainers at Hybrid Athlete have developed a training program designed specifically for obstacle racing for their athletes, Alyssa among them, and they are not surprised that she did so well.   Anthony Vennare co-owner of Hybrid Athlete says, “Alyssa is one of the strongest competitors we have ever met, she will out lift the men we work with and then go dominate a marathon that weekend, she is a true Hybrid Athlete.”

This finish was a special one for Tokorcheck, saying, “I've crossed a lot of finish lines, some after running distances up to six times as long as I did on Saturday, but none of them have ever given me such a sense of pride.  It was a great feeling to see all of my training and hard work really come together like that.”