The State of My World (From the Outside In) 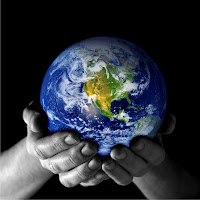 “Don't think of them now. Never think of pain or danger or enemies a moment longer than is necessary to fight them. You're here. It's our time and our life, not theirs. Don't struggle not to be happy. You are." – Ayn Rand

"When you decide you want to join the grown-ups again, let me know," Said John* with a laugh.  I rolled my eyes.  I was at lunch with two former colleagues of mine and one had gravitated towards the subject of my non-traditional job/s I had taken on since he'd seen me last, and he hadn't moved for the better part of an hour.  He particularly found my job as a Pilates instructor an interesting choice.

His only frame of reference was working with me in a high-powered, somewhat uptight corporate setting and seeing me sitting in front of him with an easy-going smile, now a small business owner who didn't arrive wearing a gray suit and heels he seemed incapable of comprehending what my life had become.  He made that glaringly apparent in how he communicated with me.  Where once we were peers, equals, he now seemed to think that I'd somehow fallen off the ladder to professional greatness and was now lost, misguided, and subject to dissection.

I stabbed my fork at my salad in a state of angry, controlled silence taking great care not to react or respond to his baiting.  We finished lunch, I gave him an obligatory hug and walked hurt and offended to my car.  I let the air conditioner hit me full on in the face on the drive home, feeling the boiling blood dissipate slowly that had built up in the restaurant, and reflected on the mostly one-sided conversation and commentary on my life.

“Within the extent of your knowledge, you are right.” -Ayn Rand

Not one to wallow, I began to think through what had just happened and almost immediately I realized that his reaction and musings were probably not isolated.  I'm sure many people I worked for previously wonder what I am doing with my life - traveling, racing, teaching, writing about sports and about women in sports.  And in all reality, nothing he said was necessarily inaccurate.  Given his station and experience, I suppose he’s absolutely right about me.  His implications were that I had basically left a career path to “greatness” to start a company that in his view… that wasn’t a “real job” for someone like myself.  That I would “regret it” one day and “what I could have had” if had stayed more true to my professional roots.  And to him, he may have been trying to tell me or warn me I’d miss out on something he had experienced for himself that he wanted me to experience as well.  It could have been intended as selfless(ish) advice from his experience.  I very well could seem crazy to him and that could be a reasonable assessment.  He could be thinking he’s doing me a favor, tough love style.

“The hardest thing to explain is the glaringly evident which everybody has decided not to see.”

It comes down to value and happiness and the perception of what one values and how that contributes to happiness. He isn’t wrong, we just value things differently and I have no urge or incentive to compete with him to be “right.”  I don’t know how I’ll feel in a year, or five, or fifteen about the choice I made to do what I’m doing now.  I plan and think about my future and the things I want for myself and my girls (and my life beyond my girls) but I reside in a place of absolute peace with my choices.  Not comfort – I always want to grow and do (and be more) but I think I am on the best path to be doing that.  It just doesn't make sense to everyone who takes a walk with me on the way.  I have to be okay with that.

“I regret nothing. There have been things I missed, but I ask no questions, because I have loved it, such as it has been, even the moments of emptiness, even the unanswered-and that I loved it, that is the unanswered in my life.”

That afternoon my phone rang.  "Hey," said a familiar voice.  It was a friend who had been a source of support and encouragement in my work and in my life.  "I want to buy you something, but you have to actually get it yourself.  I'll pay you back." He explained. I smiled into the phone, completely confused.

He paused for a moment and then the words tumbled out of his mouth, "You're getting a passport so you have to actually get it, but I want to pay for it.  I guess I want to give you the world... or at least a way to get to it.  I want that for you.  The world is waiting."

I could only smile, incapable of responding.  Just like that, it all came hurtling back to me... the irony almost comical.  In the space of just a few hours I had two perspectives offered to me from outside sources about the state of my life.  To one, I was living a limited existence, making choices that kept me from what I should have been doing, and what I could be having.  To another, I had the whole world open to me and I was just beginning to explore the possibilities that were mine for the taking.

I suppose I'm somewhere in between. Perspective is everything, but the only perspective that should move me is my own.  And I am getting the passport.

[Author's Note: *Names have been changed to protect the innocent.  To extend a professional courtesy, I let "John" read the post before it published.  His succinct response: "So I guess that's what happy can look like.  You always were a smart woman.  Publish it.  Fuck, preach it. And BTW, I agree - get the passport."]
Email Post