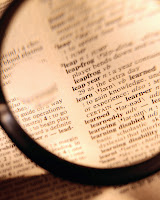 The statistics of English are astonishing.  There are over 2,700 languages worlwide and English arguably bears the most complex and richest vocabulary.  The Oxford English Dictionary lists about 500,000 and with another half-million technical and scientific terms, and we are sitting at one million.  By comparison, German consists of around 185,000 and French fewer than 100,000.  We must have a lot to say.

With half a million words in the nearest dictionary and our choice of words is vast and diverse, you would assume that we are masters of conversation.  I find that the over supply of words, the access to them, and the meaning that they are intended to bear doesn't help to say even the simplest of things some times nor do they communicate what they define.  We often struggle to find words, even those most simple, which are often the most effective.  Our communication consists not just in what words we use, but when we use them, and why.  The power of the exchange is embodied in the intention of the words, without which, even the most beautiful words remain empty and shallow.
There is no greater gift than being given the words we've been waiting to hear along with the intention, the follow through, and the commitment to not just speak them but to live them as well.  Those words come off the paper, or become electric in the air, and embody a depth and breadth going far beyond the fact that they sit beside 500,000 in the dictionary.  Because without that intention we give them in the moment, the moment they are given, they are just that, words in a book, on the tip of the tongue... they are meaningless.

Speak your words with deliberation and with the conviction with which you can see them through, and those words will be words worth remembering because they are not words that seek to merely describe or explain and excuse, they are words that define, that promise, and that ultimately deliver.  They don't need to number in the hundreds of thousands or be strung together in an eloquent and poetic formation.  They don't even need to be complex.  They just need to be true.