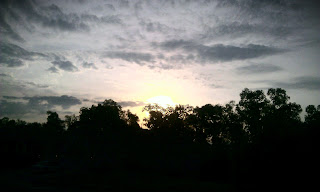 When I got home from teaching Pilates this morning, the sun was just peeking over the trees in the creek across from my house.  I stood in the door, coffee mug in hand and watched it rise.  My younger daughter was on her way home and she appeared around the corner toddling up to the front door in bunny slippers and jammies.  When she saw me, her eyes lit up and she smiled, picking up her feet and quickly rushing to the door.

"Mama!" she gushed as I picked her up and kissed her cheeks.  I hugged her tightly. It was just past 7 o'clock, and she seemed unusually tired.  Once inside, she retreated to the couch and within minutes she was asleep.  Looking over at her from the kitchen table where I worked, I watched her sleep.  I couldn't help but smile at her mop of blonde curls blanketing her forehead covering her eyes and her right arm draped over the edge of the couch.  The moment stood in stark contrast to a night nearly five years earlier where watching her sleep brought only anxiety, rather than joy.

It was just after 1AM.  The small hospital room was warm, dark, and quiet.  My eight-day-old daughter, Cate lay in a crib, wires connected to her chest, sides, and stomach overwhelming her tiny frame.  Dressed only in a diaper, she lay on her back, legs pulled into her chest, tiny hands clenched in fists beneath her chin.  A machine beeped softly in the corner.  Kneeling at her bedside, I watched her chest rise and fall in her sleep, and brushed her cheek gently with the back of my hand.

Incapable of sleep myself, I thought about how we had ended up here.  Hours earlier, while driving home from a birthday party she turned blue in her car seat.  Heading immediately to the closest emergency room I got her out of her seat hastily and sprinted through the doors.  Entering the busy waiting room holding her to my chest I shouted, "My baby isn't breathing!" and was helped immediately.  Within seconds she was hooked up to machines and being evaluated by a triage nurse.  She was transferred by ambulance to Children's Hospital, and I rode terrified next to her in the back white knuckling the sides of the gurney where she was strapped.  So small and so fragile.  She was checked in, tests were ordered, and she was evaluated by several doctors including our personal physician who drove out to check on her personally.

When night came and there was little to do but wait for tests and monitor her progress so we were left alone. I felt helpless and terrified at her bedside.  I sang one of my favorite songs softly to her as she slept, "Do not be afraid I am with you, I have called you by name.  Come and follow me, I will lead you home.  I love you and you are mine."  Over and over I repeated the words, lyrics I'd learned as a child in church that had always brought me comfort in dark times.  More than just a song, it was my fervent prayer sent out into the darkness to protect my little girl from harm. 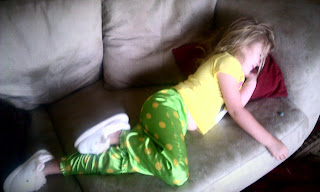 Suddenly, she gasped raggedly and I felt my heart stop.  Her chest paused momentarily as no breath passed in or out and when she finally exhaled I felt my whole body go limp with relief.  This pattern would repeat itself for hours that night.  I'd never felt so helpless and out of control.  The nurses would stop in with sympathetic glances and compassionate hugs doing little to calm my nerves.  In fact, my eyes red-rimmed with tears, wouldn't close and sleep for another two days until I'd learn that her oxygen levels were normal, and outside of a month on a holter monitor to ensure she didn't have a dangerous apnea, she was healthy.  There was no clear explanation for what had happened.

Now, almost five years later I can still recall the fear of that night, how I could actually taste it and how an eight-day-old infant, weighing no more than eight pounds held my heart hostage completely.  I still sing her that song when I tuck her in at night, and what once was a desperate plea flung to the heavens is now a joyful ritual between the two of us as she raises her small, soft voice to meet mine singing along, "...I love you and you are mine."