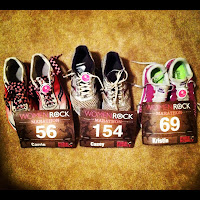 It all started on Tuesday when I woke up with a tightness in my chest. I couldn't take deep breaths and by Thursday it was obvious that my lungs were in bad shape.  Walking from room to room in my house was exhausting and I would shiver and sweat with fever and chills until I had to lay down and rest.  I was prescribed antibiotics and an inhaler, and told countless times how foolish it would be to try to run 26.2 miles in just a couple days, what it would do to my lungs, how hard it would be on my body that was fighting off an infection, but I knew it would happen anyway. I politely listened but my mind was made up. 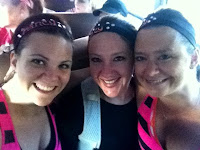 A mile is 5,280 feet and the average person requires 1,760 steps to finish one.  I'd repeat that 26 times in just a few hours.  Over 46,000 steps.  The numbers can get overwhelming fast.  Even the 26.2 is a big number, it isn't something I often think about and  I'm rarely nervous leading up to races, in fact, I seem to calm before the start.  With less than optimal training and the chest infection I was still in a good mental space going into the race and I let my mind empty of the tedious details.  I knew my body would be in the best place it could possibly be at the start and then I would just make it work.  I went with two of my best friends who I had been training with and we had more fun than three women should preparing.  Admittedly, we didn't train as well as we should have, but there we were, ready and committed to run.  As we planned outfits and talked about food and hydration during the race, I felt less and less anxiety, and just settled into the last 24 hours leading up to the race.  I hydrated, rested, and ate well... and then it was just time.

The field of marathon runners was less than 300 and I was told that nearly 100 of them opted to do the half instead on race day because of the heat.  It was Minnesota's first all female marathon and I was proud to be a part of history.  Race morning was more frantic than normal.  The race site was highly disorganized and we were late to the start because of a lack of shuttle buses.  We missed the pacers and as we crossed the start line, they were already starting to dismantle it above us.  The first three miles were cortisol-induced, we were running out hard in an attempt to catch the mob ahead of us, and when our pacer was in sight, I felt my body relax and my heart beat go back to a normal place.  Of course we never actually ran with the pacers, but I felt like we were at least where we should be.  And so at mile five or so I felt like we were just beginning.

The course wasn't ideal... marathoners had to loop the front section twice before the last turnaround sent us home to the finish line so we'd see the mileage flags for miles 14 - 21 on our first loop which isn't helpful mentally.  The last five miles were on an open highway that was mostly a straightaway and almost entirely in the sun.  Those were lonely ones.

A special aspect to this race was my daughters.  They were both there and I saw them twice before the finish line.  Once at mile 13 when I was approaching a new level of boredom.  It was like injecting happiness directly into my veins.  That got me moving again.  In addition to running large portions of the race with my friends, I spent some time with an attorney named Jody who was running her 64th marathon and she was great to pass some miles with.  She shared some homemade granola and half a beer at mile 19 - that was arguably one of my favorite miles.

I never hit a marathon wall in this race, but my lungs were in bad shape a few times.  I had strider unexpectedly at a few points on the course feeling my airway suddenly start to shut down and I was thankful for my inhaler.  The 24th mile had a wicked hill that's suckiness was appreciated at the top because it actually made the last mile almost effortless.  My body felt strong for the whole of the 26.2 miles and I spent most of the last 10K running alone.  And as much as running with friends is fun, there is something about a long distance that you just have to own for yourself.   People talk about dark places in long runs, and I've always liked the dark so it's home for me.

I found myself settling into the back of the miles and my last six miles were easily my fastest despite the heat and the lack of shade.  I'd listen to my breath, the slight catch at the top of my inhale, not quite able to fully expand my lungs, hearing the wheeze in my windpipe occasionally get ragged but never out of control.  And I ran on, and the miles fell away behind me and the mile marker flags would pass, and I was one step closer to the finish.  I played mental games, trying to remember long passages of my favorite books, I tried to name all the states and their capitals in alphabetical order.  I thought of quotes from Prefontaine and Hemingway, Anais Nin and Ayn Rand.  I prayed.  I thought of some young men and women from Team X-T.R.E.M.E. who I had seen a week earlier take on a 10.5 mile Spartan Race race course in gas masks, three of them amputees and it granted me perspective.  At every water stop I thanked the volunteers who were always full of encouragement and the police officers who were there to keep us safe on the course.

And as I came around a bend a little girl yelled, "Yay runner!"  and her mom and I met eyes as I smiled at them both and she said, "See that pink banner up ahead?  That's the end.  You're almost there!"  And my feet got light and I let my stride open up as I rounded the corner.

And then I saw my daughters.  They were waiting on the straightaway their voices rising and they first ran towards me and then with me, escorting me to the finish, one of the coolest moments of my life.  Having them there, having their sweet voices calling out encouragement and their smiling faces as they saw me finish what I set out to do earlier in the day.  It was the perfect way to finish.
And then it was over.  And the suddenness of no longer moving forward almost startled me.  I was handed my finisher medal and a banana (that my five year old ate) and my family was there to greet me.  I waited for my two friends to finish.  Ironically, we all finished our races alone.  It started as a journey together but each of us had to take on the course on our own and in our own way.  We toasted champagne and then it was back to the car for the six hour drive home.

And to my two best friends, Casey and Kristin, what we shared, even as we ran alone, was a race course that spanned 26.2 miles, over 46,000 steps, six hours from home...

Driving home, I thought of them both and I thought of what we'd done that day.  But it wasn't about crossing the finish line... because the accomplishment isn't in the finish, it's in the willingness to start.  It's not in the last step, it's with the courage to take the first one. 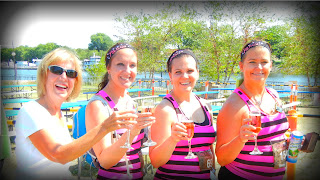