Role (With the Punches)

Cate, my five year old daughter is watching a movie and laying sideways in bed.  She can’t get to a comfortable position where she can breathe well.  She extends her chin out, lengthening out her neck and throat trying to capture extra breaths.  She moves her feet, wiggles and clenches her toes, twisting and crossing her legs trying to get to a place where she can sleep.

“I can’t lay very well,”  She whispers softly in my direction with as much voice as she has, which isn't much.  If wasn't right next to her, I wouldn't have even heard her speak.  We're at the local Children's Hospital and Cate's on her second night of fighting for breath.  Rushing her myself to the Emergency Room Thursday morning as she struggled for air, we've been battling an infection in her throat that has occluded her airway.  Her belly and chest would clench with each violent pull of air she tried to take, her nostrils flaring, anything to capture more air.

Her right arm, with the IV, has to be straight and she keeps looking at the tape like she wants to tear it off.  I’m sitting next to her, her hand is resting on the back of my hand, pointer finger drawing small circles on my skin; she hasn't stopped touching me all day, an assurance I’m here and a sign that she is still scared and needs that from me.  The room is mostly quiet, cars are rushing by outside on Dodge street and rain dots the window pane, we’re six floors above the ground and I can see from where I am sitting most of the Eastern side of the city skyline, well, what we have for a skyline.  The noise is soothing.  It’s constant but not loud.

Sometimes she tears up but doesn't cry, just little squeaky noises come out.  It’s not just that she won’t speak, no words will really come.  The doctor says that is because her vocal chords are most likely swollen and the airway so narrow and so she uses her little hands and facial expressions to tell me what she wants most of the time.  It's amazing what a raise of the eyebrows can say.  Nurses flow in and out, taking her vitals, asking me if I’m okay, bringing her Gatorade, and even bringing her stuffed animals – she got a firefly, and a coloring book that she can’t color in because she is right handed and that arm has to stay straight for the IV to function properly.  Despite all her discomfort, she still manages to lift her little face and look at them then try to say, “Thank you” when the nurses or doctors check her, and she’s done everything they have asked, opening her mouth and sticking out her tongue to say “ahhh”  well, what she could croak out, turn her head so they could look in her ears.  They take her blood pressure, put in an IV, twice, and put oxygen masks over her face and take her for x-rays of her neck and throat.  Even when she was struggling to breathe, her eyes wide with fear and her hands hot with fever, she clung to me and as silent tears rolled down her cheeks she gasped, she fought, and her exhausted body just trembled and shook.  But she let them do what they needed to do.  I held her hand and squeezed it and she’d squeeze back.  Her eyes were closed but she’d still get this little twitch of a smile on the corners of her lips when I’d do it.  Still hanging onto her sense of humor. 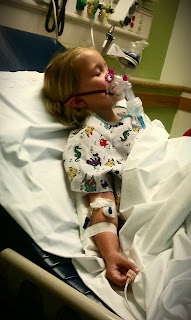 To just watch her go through this with nothing to do about it… that kind of powerlessness with such a small person… and she never looks at me like I’m not doing my job, or she doesn't understand why I’m letting it happen to her, she just wants me close.  She’s just so full of love and faith in that.  She’s incredible.  And brave.  And I’m just so in awe of her.  The strength she maintains and at the same time I can't help but be so acutely aware of how delicate she is.  The breath so ragged, and so rough going in and out, small and shallow… so uncontrolled in such a small creature.

And I take to looking at the details of her; the outlines of her toes, how the light reflects off her golden hair from the single light in the corner of the room, the roundness of her cheeks, the small sprinkling of freckles dusting her nose and high on her cheeks.  And I cover and uncover her as she changes position in bed over and over again, occasionally laying with her feeling her warmth, too warm, her body wracked with fever.  And it's all I can do.

These are my most vulnerable moments as a person and it is manifesting itself physically.  And at it's worst, I am full body tense with a sour, metallic taste in my mouth, all my senses on high alert, a tunnel vision actually taking degrees off my vision.  Aware of sweat at my brow and my upper lip, but my my trembling hands ice cold and unable to sit still the adrenaline making my body actively engaged in a flight or flight response for which there is no adequate fight or flight.  In better moments, moments like this, I'm just hollow and incapacitated.  So I have to sit, and attempt to quiet the noises in my head and ignore the beeping of the machines in the corner.

And my "role" as her mother is no longer predicated on my doing for her, becomes my complete recognition of her transcends that.  I can't help but be completely aware of her, independent of who she is to me as my child, aware of all the “incredible” that she is, the way she just fills this room with it… all that big spirit in that tiny, weakened body.  The knowledge of just how infinitely remarkable she is and how fleeting that is, how lucky I am to be here to see it, to be holding its little hand in mine.  It’s all I can do to keep it together.  And it’s like this eternally deep gratitude for having something this complete and beautiful in my life and this crushing fear that I’m going to fuck it all up. 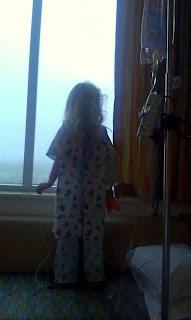 One of Cate's machines starts going off, the sudden noise startling me in the dark and I rose out of my chair feeling completely worthless, not knowing what is wrong and what to do.   This panic and almost maniacal fear consumes me – a big red message flashes on the screen, she has a “downstream occlusion” the saline not getting from the bag to her arm – there is a disruption in the flow.  Meaning – it’s not a big deal.  I don’t even realize I've been holding my breath.  The nurse comes in wordlessly and moved a few things and Cate rolls to her right and suddenly she is back on track, the alarm goes silent and the normal sounds of the room resume.  And just like that I’m tired.  But in this way that isn't because I've been overcome by the fatigue, but because I’m relenting to the idea that she’s really fine.  She’s fine and not because I’m here or not here, but because she just is and it wasn't predicated on my doing/being anything.  And just as easily today she could have been not fine.  And I wouldn't have been able to change that either.

All I had today was a front row seat to her suffering and that is one of the hardest things I suppose we have to do… live outside and beyond ourselves when we have nothing we can do.  She didn't need me to be anything but HERE with her today, and all I wanted today was to make it better.  I didn't get what I wanted but  it deepened the appreciation we have for each other outside of the roles we are assigned.

And as the sun came up, so did her spirits.  She ambled over to the window as the sun was rising, a misty rain still falling and clouds swirling ahead of her and she just pressed her face up against the cool glass and closed her eyes.  She didn't say a thing, but I know in her own way she knew the worst was over and she knew that she'd passed through something.  And as her mother I couldn't bring her to that place myself as I would have given anything to do.  But I'm just thankful to have been able to stay near, bear witness to her strength and resilience, and stand with her, now safely, on the other side.

[Author's Note: As quickly as Cate's virus arrived, it's only slowly retreating but she is home and recovering well from our two day hospital ordeal.  Officially, she was diagnosed with a viral throat infection that led to her airway swelling, occluding her airway significantly.  I want to thank my remarkable family and friends who were supportive and gave us a lot of love from afar.  And to the doctors, nurses, and staff at Children's Hospital and Medical Center, thank you.  From the ER to the Med/Surg 6th floor where we stayed, the care and treatment we received was second to none.]