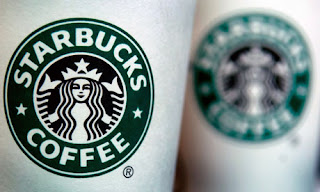 I stopped at Starbucks and instead of going through the drive-thru that was four cars deep I wandered inside instead.  It's been a rough month for me on a lot of fronts and I've felt lost the last week or so, uncomfortable in my own skin, trapped in bad habits, and I have had no idea what to do but try not to focus on it all the time.  (See: I've been a self-absorbed basket case.)

And two steps in the door I heard someone say, "Carrie... Heckerman?"  And I was paralyzed, I haven't been called that name since third grade, and I turned to my left and realized that was the last time I'd seen the person saying it.

He smiled, "Pretty sure you're Adams now, right?  I think I've seen you on Facebook.  What have you been up to since we were six year olds?"

To which I replied, "I think you're mistaken actually.  I'm pretty sure we were seven the last time we saw each other."  We both laughed.

And he bought my coffee, we sat at a table by the window, catching up on our lives a bit.  He and his wife and kids were in town for a family visit, his parents were still in town.  He told me about his job and how he traveled a ton, adored his family, and couldn't believe how much the city had grown.  He doesn't get back to town very often.  And it's hard to span 24 years of your life in a coffee shop, there was so much distance between our last encounter, in years, in experiences, in everything.  But we glossed over the highlights, made small talk about nothing in particular, and laughed a lot.

After about 20 minutes we ran out of small talk, and decided to leave.  As we both stood up he said, "You know, it's funny to talk to you as an adult. Funny in a good way."  He paused, "You've come a long way since we were six."

"Seven," I corrected.  We both smiled.

And I got another cup of coffee and sat back at that same table we had just shared and realized just how much time had passed since I'd seen him, how many things existed between then and now.  My life experiences, all 31 years of them, good, bad, and ugly aren't going anywhere and I suppose I could say I earned them.  They are a part of my past and that makes them a part of me.   I don't get to choose whether or not they are coming with me as I move forward, they are just as much connected to me like the skin I can't get out of.  But I get to choose what I am going to do today to add to that existence.  I'm tired of looking over my shoulder expecting the same things to happen, and letting the things behind me decide what I expect to be ahead of me. Using them as excuses.

Like the seven-year-old me that could not even begin to imagine what was waiting up ahead, who now sits, at 31, in a Starbucks drinking a cup of coffee... And so it stands to reason that the 31 year old me can hardly imagine what is next either...

And it doesn't wrap things up in a bow with a perfect answer, but it is a 24 year old lesson that goes a long way in starting to get comfortable in my skin again.  That's a step forward.  Apparently, it starts with one step (and two cups of coffee).