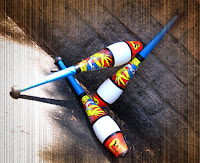 I taught myself how to juggle my freshman year of college.  While I never got beyond beanbags and balls (there were bananas a few times), I remember seeing a far more impressive juggling demonstration when I was in the sixth grade.  Jugglers came to my school for an assembly.  They started simply with colorful scarves that they would send up floating in the air, weightless, sinking slowly, almost waiting to be caught.  They moved so slowly with the scarves, the juggler's hands and eyes watched them lazily lift and hang slowly in a soft, invisible peak only to fall back to his patiently waiting hand.  Slowly, they began to juggle heavier more awkward objects first oranges and apples then cubes, balls, clubs, rings... culminating in one of them juggling batons set on fire as the other juggled three heavy chainsaws.

Perspiration rose on their lips and brows as they struggled, one behind the heat and one under the weight, their eyes darting, brows furrowed in deep concentration to ensure they didn't get burned or cut.  As they rounded out their throws and catches, they finished at nearly the same time.  Effortless catching the handles of the clubs and chainsaws.  Their eyes snapped into focus finally looking out toward the crowd and a smile rose on their mouths...the show was over. I always wondered how long they could have done that before failing...

When I first started to learn, I dropped the bags all the time.  They would slip through my fingers, just out of my grasp, and hit the floor.  So over and over again practiced for almost two full days.  First with just one.  And then I had two, back and forth, back and forth, scooping, tossing, always keeping the arc at eye level.  Then, suddenly, I could handle three and I could even start wielding them pretty well, up and back, catching and tossing, comfortable in the simultaneous movement.

And I'm still juggling... but I haven't touched a bean bag in years.  There used to be times when it felt like I was juggling scarves, easily moving in and through my responsibilities almost effortlessly but over time it's gotten more complex.  There are some days, that I can't keep count everything I have to keep moving everything I volley up momentarily, just to have something else take its place.  And so it goes. And I'll keep juggling... even if some days I feel like I might as well be juggling chainsaws on fire.