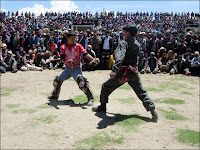 I’m not an angry person on a regular basis. In fact, I’m quite the opposite.  I have been made fun of for striking up conversations with strangers from supermarkets to restaurants. I laugh easily, find almost anything funny, and take most negative situations and people in stride. I don’t get upset easily in most circumstances either; children, frequent travel mishaps, and just getting older have lent themselves nicely to my reserves of patience. And while 2013 is gearing up to be my year of making myself “Better Every Day,” and all the positive growth I hope to enact in the New Year, I’m not going out of 2012 without a little venting. I’ll maintain anonymity of those involved and the awareness that I’m far from perfect in a variety of capacities… but it’s about time I get a few things off my chest with a little verbal beat down Takanakuy style.

What is Takanakuy style, you ask? It's not Mayan mathematics, for one.  (Zing!  Too soon?)  For those of you who speak Quechua, a regional language from a remote region in Peru, you’ll easily translate Takanakuy to mean “when blood is boiling.” The Peruvian province of Chumbivilcas plays host to the festival of Takanakuy each year, celebrating with the traditional drinking, dancing, food, and even fancy costumes… but it ends with a series of public fist fights on Christmas day. That’s right. Let’s celebrate by any means at our disposal and when that’s exhausted, let’s throw down. There are no restrictions on who can participate – young, old, men, women, but the intention is simple: Settle a lingering score with someone in town, whether civil or personal old school with a school yard ass whooping. Mano e mano.


It’s not without good intention, the hope is that they will strengthen the community and ultimately, through violence, achieve a higher degree of peace. Maintaining an air of civility, the fights are organized and officiated by other locals. The rules are few, no biting, no striking a person when they are down. The fights don’t last long and they always end with a handshake or an embrace. And that is the end of it; the matter is settled, over and done. It leads the townspeople into the New Year with no baggage and no grudges. What’s done is done and perhaps even seeking medical treatment at the local hospital. Sounds pretty brilliant to me…

While 2012 was wrought with incredible people, generous acts of kindness and inspiration in my life, there were more than a few situations (and people) who immediately raised my blood pressure and sent me into a “Rage Against the Machine” kind of mindset.  And while my tongue is firmly in my cheek with my commentary, all of these people and scenarios were a very real part of my 2012 experience.

To the snow plow driver who after I spent more than an hour clearing my driveway and half the street proceeded to leave massive snow boulders at the end of my driveway making it impossible to back out my car without having to pick them up and move them Atlas style, you are only outmatched by my garbage pick-up driver. You, sir, knocked my FULL trash can all over the street, then, didn’t pick it up or take it, rather left it overturned in the street because it would have taken more than four minutes for you to pick up the mess you made. It’s fine. Two weeks’ worth of trash smelling up my garage in the summer heat isn’t pleasant… you’re inconsiderate, lazy pricks.

To the woman who walks her dog by my house every morning around 8:40 and lets your Great Dane looking monstrosity take man-sized shits in my yard and pretends not to notice, back turned, and looking nervously around for someone to witness the heinousness of the crime… I can see you from my kitchen windows. Even your dog is embarrassed for you. Get a bag, or I will… and light it on fire on your doorstep, ring the doorbell, and stand there and watch you put it out.

To the bro at the gym with the D.A.R.E. cut-off t-shirt and sideways ball cap who makes no efforts to hide your ridiculously exaggerated and disrespectful stares at my ass every time I walk through the weight room at 5:15AM to teach a class, you make it impossible for me not to want to punch you in the throat. I actually think it’s part of your workout now. You’re an idiot with underdeveloped calves.

To the woman who berated a special needs child in front of classmates, parents, and anyone within a half mile radius of where her voice could be heard at school pick-up time, you’re lucky all I did was tell you quietly to stop what you were doing. You’re even luckier you took my advice, because it was more of a warning.

To the chick who took my cab while I was distracted wiping blood off my jacket at 2AM outside Club O downtown… It was fine, you probably needed it more than we did… my date just got his head cracked open protecting me in a street fight when a thug in a Jeep Cherokee pulled out an asp (expandable, tactical baton) and loomed in front of me when I crossed the street… at a cross-walk… when I had the right of way. After being interviewed by police multiple times and treated by medics at the crime scene, we weren’t at all tired and wanting to leave in the cab I called. You suck.

By the way, guy with the asp the cops never caught that night… you suck too. I was in heels and miniskirt. Clearly, the asp was necessary for your protection from me as I walked by, completely unaware of you. I’m not sure how the street cred system works, but you must be pretty high on the food chain to be targeting women half your size. Oh, and your girl in the front seat yelling obscenities to me was cute too, especially since I’ve never seen her before. Her capacity for hatred of strangers was actually impressive. And her enthusiastic encouragement for you to beat up girls with a weapon was cool. Tell her she’s going to be a great mom someday.

To the taxi driver in DC who smelled like mustard and hemp that offered to marry me off to his son in retribution after taking me in the wrong direction for $11 worth of cab fare and then sheepishly offered that you “got lost” in the city you’d been living in for four years, I’ll just take my $11, thank you very much. Your son can marry the next woman you swindle. I’m sure you “get lost” with a lot of tourists. You’re an ass.

To the man who offered only verbal encouragement as I changed my flat tire in 40 degree weather outside a Starbucks wearing only a tank top, capri pants, and flip flops. I’m glad you never left the warmth and comfort of your car… thank you. I needed proof that chivalry wasn’t just dead; it was mocking me from a moving vehicle. Your mother would be really proud of you.

While I could easily continue, I am already feeling better. The angry drumbeats of Rage’s “Killing in the Name” are being slowly replaced by the soothing strumming of “Dosed” by Red Hot Chili Peppers and I’m thinking that maybe these normally peaceful Peruvians are onto something big. Maybe my 2012 Verbal Takanakuy didn’t involve a rear naked choke, a kidney punch, or a bitch slap to those who have enraged me over the course of the year, but I’m feeling much lighter for the passage into 2013.