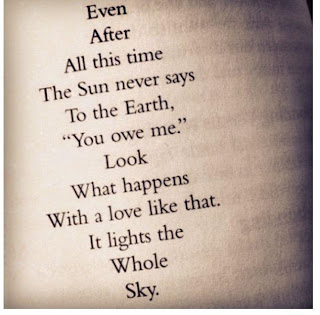 Christmas night she hovered over my shoulder as I crushed his pills and flushed water through his feeding tube.

"Grandma, you can go sit down and relax.  Jenny and I can do this."

Bouncing from one foot to the other, she hesitated before walking away.  Perching on a bar stool in my parents kitchen, she watched us sharply as we administered the rest of her husband, my grandfather's, nightly nutritional feeding.  At 87 (his birthday was December 19th) his health is failing rapidly and he can no longer eat solid foods, instead, taking his daily supplementation through a feeding tube in his belly.  We'd picked him up from his rehab facility so that he could spend a few precious hours away with his family on the holiday.

A fall early in the night threatened the evening, but he wasn't injured and once settled in a chair, he sat across from me and we exchanged faces and jokes as the children tore through their gifts, chaos in the family room a far cry from the quiet solitude he has back in his room.

"Well, how about that?"  He whispered to me at one point.

I kissed his cheek.  By evening's end, he was exhausted, asleep in a chair, neatly tucked under a blanket, the six great -grandchildren taking care to tip toe past him to avoid disturbing his slumber.  My father would be driving him home, my grandmother would be driving herself back to her empty house.  Before she would leave, she awakened him and whispered to him before hugging him gently.  Their first Christmas night ever spent apart.

Diagnosed with Lewy Bodies dementia and Parkinson's Disease along with chronic pain and a multitude of injuries, some from significant osteoporosis (two broken hips, a broken neck, a shoulder replacement) and some dating back to his service days (lower back and right knee degradation) in the late 1940's, he is far from the picture of health.  Systemically, he has been breaking down for years and it's been difficult for the whole family to watch, none more so than his wife of 63 years.  Prone to falls, he requires assistance to move from one place to another, shuffling clumsily with a walker, and most recently, he's been relegated to a rehabilitation home, in the wake of multiple infections including his wrist and lungs with pneumonia requiring antibiotics via IV every 18 hours.  We were informed just today, they believe his pneumonia is back and he has again inadvertently removed his feeding tube. 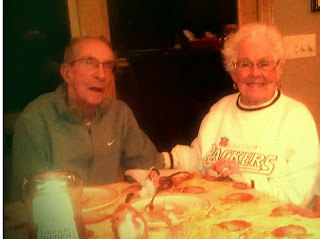 Because of his Parkinson's and Lewy Bodie's  he is often confused, like a person shuffling down a hallway of closed doors in his own mind, any one of them occasionally opening, sometimes from years ago, as his memories and his thought patterns disintegrate.  It varies day to day, but it is getting much worse in recent years. You can tell when it happens, his eyes glaze over and he's lost to the familiar again.  His lucid moments, he's quick with jokes, he recalls precious details, and he seems to illuminate from the inside out.  He's the man I remember.  Whether lucid or not, he seeks my grandmother out constantly, even when confused or agitated, her presence seems to calm him and so she is never far from his bed or chair side.

My grandmother, herself 83, has had her fair share of issues this year, a rough and painful bout with shingles, a foot surgery, cataract surgery, a broken wrist from a fall outside his rehab facility, another fall just last week (in the same rehab parking lot) has left her face bruised from temple to chin and yet, she continues to visit him daily, keeping him company by his bedside, often trying to figure out how she can bring her husband back to his home with her.

Their love story began when they were barely into their adulthood, and they couldn't have been more different.  His childhood was far from easy, his father died when he was young and when he returned to Wisconsin from the war, he didn't have a home to return to... alone and still battle injured, he was forced to take up residence in a one-bedroom apartment and attempt to rebuild his life, mostly alone.  When he met my grandmother at a mutual friend's wedding, a sheltered and simple farm girl who knew very little about the war or what my grandfather had endured, they quickly found their match.

The night they married, he took her, for the first time, to the home that they would share.  The first home he's ever really known.  Something that they both were getting for the first time.  Something of their own, something they would build, something that they still fiercely protect.  For furniture, they had a single chair, but he says it was the warmest comfort he'd ever experienced walking into that house that night.  And for her, he came to be the rock she'd depend on as she raised their family that began just 10 months after their wedding when my aunt was born.

So, for 63 years, they've endured.  Taking care of one another with what they always had to offer, however little it seemed to be, and with what only they could selflessly provide.  Not perfect, and not without struggle and hardship, they always sought to take care of the other first.  It was just that simple.  Despite their differences they were well-matched. Passing back and forth the needs and the burdens of one another, her giving him a safe place always to return, him giving her a constant means and an abiding reason to provide one.  Their precious home only exists because they made it together, for one another.

And that is what love is supposed to be about... when you're not looking for what you think you're supposed to get, you might just find the home you never knew you could have.