Big Changes One Day at a Time

"You have some decisions to make," he said.  We were sitting in a doctor's office, my GI physician having a follow-up appointment with me after some issues following a procedure on my esophagus.  "The good news is that you know... so the question is, what are you going to do about it?"  He looked at me and smiled.  "I'll do my job, you do yours, and we won't have to see each very often."

The procedure I had done served as stark and sobering confirmation of an earlier diagnosis of Barrett's Esophagus, a potentially pre-cancerous condition of the esophagus that I received at the age of 24.  Some aggressive cell growth they found in biopsies collected at the time of the procedure has me, at the tender age of 31, needing to make some major changes, in the hopes that they will stave off the progression of the condition.  There is no guarantee one way or the other, but a lot of clinical evidence supporting the idea that daily medication, changing lifestyle, and dietary habits can have a pronounced positive affect.

At the admission of my physician, I'm an interesting case.  When I first met with him, he assured me that he'd disprove my earlier diagnosis of Barrett's (made by a different doctor).  But, he couldn't, in fact, the Barrett's was "quite pronounced."  Most people who are diagnosed with Barrett's are older, between the ages of 45 and 70 and are predominantly male.  It's characterized as a serious condition that is associated with GERD, or acid reflux.  Normally, patients complain of routine discomfort and heartburn, though Barrett's itself has no actual symptoms.  The kicker with me, is that in addition to being considerably younger and female, I don't routinely suffer from GERD.  Once every couple years I have a flare-up that is intense but not long-term and outside of those windows, I don't normally experience any symptoms.  I have no chronic reflux.  So as my condition progresses, I may not have any indication whatsoever.  That's a scary thought. 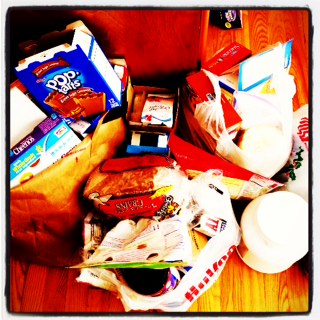 I left the doctor's office and immediately made an appointment with a dietary specialist who deals esophagus health.  Admittedly, I've never had a good relationship with food and I was concerned how I was going to make the changes I knew I needed to make.  She made it pretty easy for me though.  She showed me photos of patients suffering from esophageal cancer, something that wasn't easy to see (I won't gross you out, but if you want to see similar images, click HERE).  She also talked about the reality of patients who are diagnosed.  It's a cancer that isn't normally curable and is incredibly painful. Survival rates range from 5% - 20% at five years.  The reality is that most patients diagnosed with esophageal cancer ultimately die from it.

It wasn't all doom and gloom.  She had good news too - cancer risk is relatively small, even with those with Barrett's, though I was younger than most diagnosed patients which made my risk higher long term, the cancer would have more time to develop if left unchecked.  Very knowledgeable  she gave me some ideas for lifestyle changes I could adopt.  She also explained the body's reaction to different types of foods and then she gave me some resources to take home.  *Already gluten-free, she recommended that I avoid dairy, caffeine, and alcohol.  We talked about what that would look like day to day, how I would continue to cook for my family and still maintain my new diet, and how to get started with the basics.

Admittedly, I was overwhelmed.  While not eating gluten, and highly limited in dairy, eliminating caffeine and alcohol would be a challenge, but a worthy one. She also told me that outside the caffeine I needed to stop eating these things "cold turkey."  The caffeine withdrawal might give me headaches so she told me to ease off in that department.  The only big one I balked at was the coffee, but she put it in perspective pretty quickly.  My affinity for the taste of flavored coffees could be accommodated by decaf and my lack of caffeine consumption wouldn't be felt so drastically if I got better sleep.  She hugged me before I left and said, "This isn't the end of the world, this is taking control of a new one. Just take it one day at a time."

So, I hit the ground running.  All told, I'm gluten-free, dairy-free, sugar-free (excepting natural sugars found in whole foods), caffeine-free (mostly, still one cup of coffee a day for the time being), and alcohol-free.  I joked that all I could have was, "air and unicorn tears."  New Year's Day, with both kids gone, I took to the kitchen and took all the foods I couldn't eat (that my kids wouldn't eat) and bagged them up.  The unopened items were bagged up and I took them to the Lydia House along with some vitamins and other personal items to donate to the battered women's shelter.  And while I hated to be wasteful, the opened items were thrown out.  I went to the store and re-stocked my shelves with the foods I could have, a surprising amount given my restrictions and with the advice of my dietitian planned some meals that I and my family would be able to enjoy.

I spent half the day in the kitchen preparing some meals and some basics so that I didn't feel like I didn't have any options.  Hard boiled eggs, grilled turkey, bacon, sweet potatoes, spaghetti squash, and guacamole.  For meals, I made zucchini and carrot crust-less quiche, and bacon-wrapped bone-in chicken thighs.  The bones will be used to make bone broth later.  I made a chipotle rub from organic spices and the smoky flavor is incredible.

It felt good to be able to take some ownership of how I would react to my diagnosis and work to prevent further damage rather than fix problems as they come up.  Just a few days into these major changes, I am feeling calm and in control.  A family dinner at my sister's house, I came prepared with food so that no special accommodations had to be made.  Being a captain in an upcoming Nutrition Challenge at my gym, CrossFit Omaha, has me further motivated to not just stay on track, but to enjoy myself in the process.  One day at a time.

*I am not a physician nor am I a dietitian.  This isn't an advertisement or an endorsement for any specific dietary regiment for anyone else, a treatment for a condition or meant to replace advice from anyone else's medical health provider.
Email Post
Labels: alcohol free Barrett's Esophagus caffeine free CrossFit Omaha dairy free gluten free sugar free