Life Lesson #19: Hold Your Own 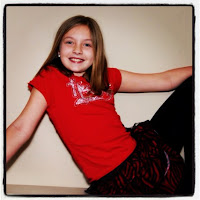 Taylor moved the ball down the soccer field, moving past girls, head up, body relaxed and calm.  Having already been playing hard for almost 45 minutes, her cheeks were red, and sweat lined her brow and hairline.  As she neared the goal, she found herself between two defenders aggressively bumping and pushing her, fighting for possession   She struggled to get through the pressure, battling hard, and with a final push lunged forward and kicked the ball past the goalie, fell to the ground and rolled.  She looked up just in time to see the ball cross the line.

She raised her arms, turned, and met my eyes.  My normally timid ten-year-old held her own under pressure.  Exhausted but elated, she pulled herself to her feet and trotted back to midfield.  There was a little swagger in her step.  And moment by moment she's not just becoming who she is going to be passively, she's believing in that person as well.

Our world is full of a constant stream of feedback and we have choices. Internalize the feedback, disregard it, learn something from it, or ignore it completely.  There is a time for all of those responses.  The difficulty is finding the right response amid all then noise that comes along with it.  The nearly impossible is retaining the self that exists at the center of it all without losing your way.

There are so many things I want my daughters to know about themselves, believe that they can accomplish, recognize they can improve, but stand up for themselves when necessary.  Underneath what they can do, what they have to learn, and how they interact with the world every day, they have to know who they are without letting the outside world and the people in it dictate what that means for them.  Without letting it change the goodness underneath it all.

Whether it's an airbrushed model in a magazine, a mean kid at school, or even someone who they thought loved them deeply, I want them to remain strong and clear-minded when the feedback arrives.  Don't change for the wrong reasons, don't listen to the negativity when it's not productive, don't assume that you know everything, but recognize that you don't have to always believe the noise.  I want them to protect the things that they hold dear, that they know to be true.  Right and wrong isn't the same as truth and perception.

I want them to always strive to be better, every day.  Not assume that they have arrived at their full potential, but not to assume immediately that they are not good enough as they are.  We're all works in progress.  I see their goodness, their beauty, their generosity and their strength.  They need to see it too.  Belief in the core, awareness of self drives what they do when they are out in the world.

So, hold your own.  The rest will come.