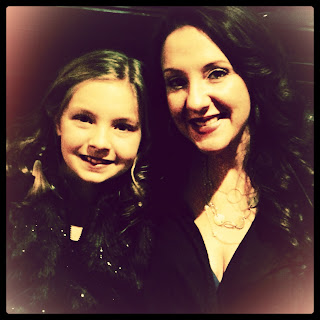 As New Year's approached, I began thinking about how I would ring in 2013.  The one thing I knew for sure was that it would involve my daughter, Taylor.  Cate would be gone and much like my amazing day with her, sans big sister, I would get the same chance with Taylor. She wanted sushi, so I made reservations at a local restaurant, a bit fancy, so we both got dressed up, I did her hair and even let her put on some make-up.  She and I went through her closet finding some new Christmas clothes and she felt really grown-up as she milled through my jewelry and picked out a pair of my earrings.  She sat on my bed and watched me get ready, stopping me and asking me questions about make-up, about how to put outfits together and right before we left, she and I both put on some perfume, a squirt on our neck and a small dab on each wrist, we were ready to go.

When we got to the restaurant, they hung up our coats and we waited for our table she couldn't stop smiling. We ordered cucumber water, edemame, a few rolls, and albacore sashimi and salad for me.  We didn't talk about anything in particular or earth-shattering, but she never stopped talking.  I realized how animated she gets when she talks about something that interests her and like me, she talks with her hands when she thinks she isn't getting a point across well-enough.  Polite and well-mannered, she was a delightful date and she was thrilled when she had no trouble with the chop sticks while we ate.  "I'm getting good at this."  She told me. 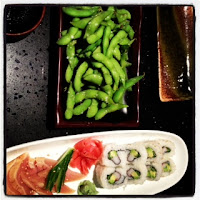 Uninhibited by a busy little sister and constant demands, we relaxed and just spoke to one another.  She asked me about my work, something she's never done and we talked about things that had been bothering her we'd never fully discussed.  Before I realized it, over an hour had passed and the plate of food was empty.  Sliding out of here seat across from me, she snuggled in next to me and gave me a squeeze. As the older child, she often gets less attention but far more responsibility.  She liked the chance to have me all to herself.  And I am realizing more and more how grown-up she is.  She told me what worried her about her upcoming middle school start next year, she talked about her excitement for her upcoming archery lessons, and the science experiment she did at home earlier in the week (the time home has led her boredom to become quite productive.) 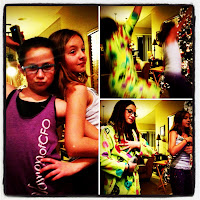 On the way home, we picked up her best friend so that she could have a sleepover to ring in the New Year.  The girls and I watched movies, and played Wii Dance Party, nothing fancy or glamorous, but we never stopped laughing.  I made them pizza and they ate ice cream.  It was perfect.  Around 11, I was exhausted and headed upstairs to lay in bed... I did manage to stay awake for midnight and Taylor bounded in my room and kissed my cheek before heading off to her own bed herself.  I fell asleep easily and stayed asleep until almost dawn when I awoke to get some work done around 5 AM.

By most accounts it was just another quiet night at home, and as 2012 closed and 2013 began, I realized how lucky I was to have such an incredible young woman sleeping in the room across the hall that was the perfect date for any New Year's Eve.