Open Letter of Thanks to Team X-T.R.E.M.E. 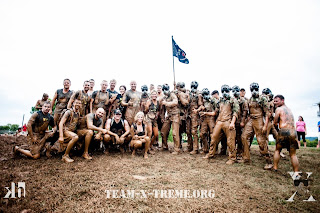 How rare it is, to have those moments that bring you completely past the ability to form the simplest of words.  How you can become so disarmed in a moment there is no other reaction but physical tears.  And yet somehow, it has become my consistent and unwitting condition every time I see you.  A compulsion I feel should come with an apology.   As a woman of what I'd consider a fair amount of intestinal fortitude, I can say emphatically that I’m not a person easily brought to tears.  Suffice it to say, the tears you saw in person on Thursday afternoon at the reception of your gift, were the tip of the iceberg.  Once alone, hours later, the full weight of what I was given, what it represents, and what it means for me to have it in my care, well, we’ll get to the Times Square gift shortly... 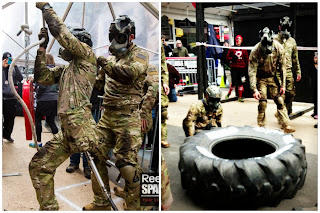 Over the past several months in coming to know you all and seeing you in action on and off the race course I’ve become accustomed to seeing the team in your blacked out gas masks and uniforms, patches on your shoulders often the only indicator of who is behind the mask.  (I still have a tough time telling some of you apart in photos when you’re in your gear!)  I’ve met those who run with you, civilian and military alike, proudly wearing their Team X shirts, those who do all they can in word and deed to support and assist.  I’ve even met some of your children, families, and friends.  (LukeSliwinski, I’m talking to you here.  You’re an incredible young man.) I can never accept my life as being my best effort; I will always strive to be better as a human being because I know all of you. 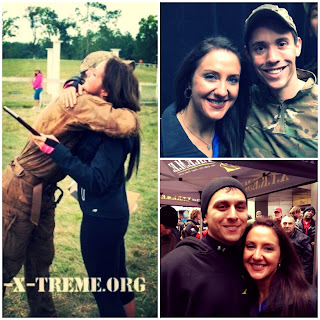 The dramatic images of what I’ve seen in person, in print, and on video are images that are burned indelibly into my memory and ones that have changed me and those who have seen them.  They have changed what I believed to be possible and I don’t mean physically, I mean in humanity.  And though it never ceases to inspire watching Todd Love navigate monkey bars or climb a rope, Eduard Lychik climb a wall, or Noah Galloway do burpees, it’s what it all means when you are together.  It isn’t about belaying a rope climb or pushing a member over a wall.  It’s not what you do, it’s who you are; the tangible and intangible loyalty and trust that doesn’t need confirmation, because it’s constant and abiding.  The hand that’s there without asking, the adjustment of a limb about to catch a wire, or hit a wall before it happens, and the constant watchfulness for one another’s safety and success, the dedication to the efficiency of the team as a unit.  I could fill a book with the pages of what I’ve seen you accomplish, but so much of the content would revolve around how so much of what you do, is done together.  Shoulder the burden without a request, share the load without complaint, and selflessly do what must be done.  It’s the love that exists there.

And over the course of the last several months, I’ve found myself being brought into your community, welcomed like family and treated with kindnesses and inclusions I can only hope to deserve.  And it never ceases to overwhelm me, the respect, and your thankfulness you offer to me constantly, to which I can only reply, “I owe you more than I can ever repay.”

I can’t imagine why you find it so important to continue offering me thanks for what I perceive as being the very least I can do.  And I’m thankful, not just as an American who has enjoyed the freedoms of your many sacrifices, but as a friend who knows you, has met your families and friends.  I’ve had the privilege to hear your stories, shake your hands, share laughs and tears, embrace you (even when covered in mud), break bread and raise a glass with you around a table.  I’m more than thankful, I am aware of the power of your mission.  That demands to be shared with the world.

As a writer, you’ve given me the gift of telling parts of your story.  Those words have been some of my most precious to write.  Beyond your mission, bigger than what you do, you are the individuals who have collectively become its heartbeat.  You are the life force that gives an idea meaning and the power necessary to sustain itself.  Without that, a mission like yours cannot endure.  You are all that heartbeat. 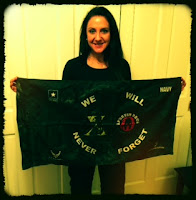 Now, the gift you presented to me in Times Square that I can hardly even describe without the sting of tears threatening to fall (yet again).  The Team X-T.R.E.M.E./Spartan Race flag, covered in mud from Leesburg, the Carolinas, and Times Square, (and a bit of Todd Love’s blood) is folded in a Ziploc back in my carry-on luggage mere inches from me as I write.  It will be framed, alongside some of Kevin High’s extraordinary photographs of the team and community, and then hung in a place of prominence in my home.  Never have I been given something so meaningful, something I could never hope to explain to anyone who asks, because where would I even begin?  And as what felt like the whole world rushed by in New York City, all I could do then was cry... but enough of that.  Now, I express my deepest gratitude to you with my first breath and make you a promise with my second. 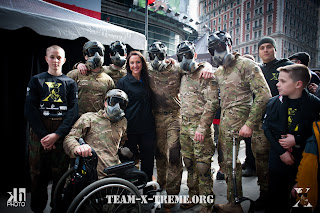 To the team, the community, to you all as individuals, I am so very thankful for your generosity, kindness, loyalty, and friendship.  And I won’t forget your mission, I couldn’t possibly. I will be here for you in all ways that I can be… something I’ve learned from your worthy example.  That is a promise that comes without your asking and without any need for your thanks.