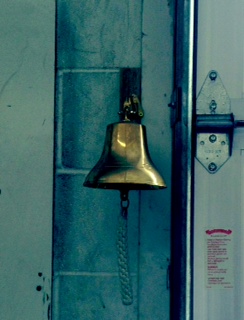 I kept saying it in my head.  It was almost my turn.  I'd bailed out under the bar on my seventh and ninth of ten rounds attempting escalating hanging squat snatches and now I was struggling to get out of my own head.  I'm normally not aggressive with overhead movements.  A torn left labrum limits my range of motion on the left side effecting my ability to go "heavy" and that shoulder was already angry after the warm-up and first nine rounds.  Normally, I'm very cautious and would have ducked out at this point.  Taken the weight  I knew I could handle.  And I had done this weight before.  I knew I could 77#.  It wasn't enough today. We put on five more pounds.

In the gym there is a bell attached to the wall by the garage doors leading outside.  It was put on the wall months ago and designated the PR (Personal Record) bell.  And during a workout if you hit a PR you are entitled to ring the bell.  There isn't anything special about the bell's appearance   I don't even know where they got it.  But you want to ring the damn bell.  Today, I needed to ring that damn bell.

As an adult, we don't get those moments very often.  Those bases loaded, bottom of the ninth, three strikes kind of moments.  And this wasn't one either... not to anyone but me.  No one is losing a shot at the Super Bowl if I can't pick up the barbell.  Outside of my handwritten account in a notebook no one would remember this moment, and in a month or maybe two I'd be even stronger and probably be able to do this weight easily.  But it wasn't a month or two away, it was today and I needed a mental victory.  I needed that PR.  I needed to not just feel better, but to actually be better today; further ahead than I was yesterday.

3 -2 - 1... the clock rang out.  My turn.  My shoulder felt hot and was already aching.  One rep.  Taking a few moments, I set up and took a deep breath.  Without a thought in my head, I picked up the bar.  Down my thighs, jumping, hips extended the bar went up...It wasn't pretty, I had to fight for the lock out, but I got there.  Five more pounds.  It was just something small, something mostly insignificant, but it was mine... and most importantly it was forward.