"I always loved running – it was something you could do by yourself and under your own power. You could go in any direction, fast or slow as you wanted, fighting the wind if you felt like it, seeking out new sights just on the strength of your feet and the courage of your lungs." -Jesse Owens

On April 21, 2013 I ran 26.2 miles for Martin Richard and his family. Admittedly, I had not been spending much time logging mileage, deferring more often to my CrossFit gym.   I had logged a grand total of 24 road miles in the whole of 2013 up to this point - 13 of them coming from a half marathon in March.   But when I heard my friend Frank Fumich was organizing a series of runs around the world to help raise money for this deserving family, he himself running three marathons back to back, something in me knew I had to help.  I decided after donating $26.20 to the cause, I would run in Nebraska and join more than 25 other locations worldwide in the effort.

Eight year old Martin Richard of Dorchester, MA died on April 15th waiting with his family at the Boston Marathon finish line. His mom and sister were also critically injured. His mother Denise, has had to undergo brain surgery. His six year old Sister, Jane, has lost a leg - her life was only saved by the heroic actions of bystanders. Bill, his father had to have several ball bearings removed from his leg. Martin's older brother, Henry, was not physically hurt in the blast... I can't imagine what they are facing now and what lies ahead.  It would be something I would think of often as I ran.

I was alone for the marathon - the time without contact was something that I learned was far more a challenge than the running.  Normally, there are other runners, people on the sidewalk at various points adding energy and encouragement.  But for the 4 hours and 22 minutes I spent outside, I was almost completely by myself.  Fueled by the knowledge that runners all over the world were joining me in marathons of their own, I kept moving.  It was a long afternoon and I hadn't trained for that long of a run since the fall of 2012.  My body protested.  At mile 19 I hit a short and fast wall and it was then that the rain began to fall. 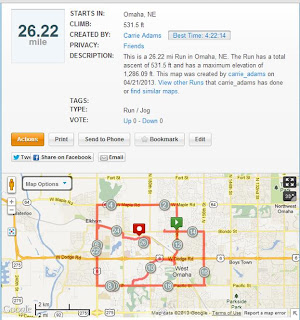 I thought often of the Richard family, of the running community who was now doing what we knew how to do to support them.  I thought of my two daughters, safely home and how thankful I was for that fact and how precious and delicate this life truly is.  I thought of my grandfather who passed in January and the loss that is still deeply felt in his absence.  Turning the final corner and heading down the hill, the rain falling softly around me, I ended my 26.2 mile tribute.  There was no finish line, just my mother's driveway where I had mapped my run to end.  My only witness a neighbor bagging up grass clippings two doors down who gave me a friendly nod.

Standing there I was suddenly overcome and could do nothing but sit, face in my hands, and let the tears fall.   An unexpected emotional response to something that began and ended for a family I had never met and a little boy I'd only seen in photographs.  A family who had lost him far too soon, who were still themselves recovering from physical injuries, and had such a long way to go.  It made my run seem so insignificant and I only hope it helped raise more precious dollars for their future.  To date, over 1,000 miles have been run by hundreds of runners for this cause.  It's humbling to be part of such an incredible running network, a group of people who would rally and come together for a family so deserving in the darkest of days.

You can help too.  Beyond running the miles, please donate to the cause.  Just $26.20 to help out a family that is just at the beginning of a very long journey of healing.  Visit this link to learn more about the runners around the world takling part and, if you can, please donate.  http://www.firstgiving.com/fundraiser/EnduranceTrust/westandunitedwerununited
Email Post
Labels: Boston Marathon Endurance Trust Frank Fumich Martin Richard Matt Nelson United We Run