Filling the Void with Awe

“Everybody needs beauty as well as bread, places to play in and pray in, where nature may heal and give strength to body and soul.” ― John Muir 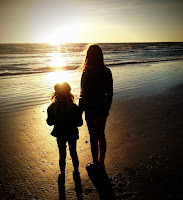 I haven't blogged in nearly a month.  And there was not a void in content, rather in finding time that took a few mountains to remedy.

As far as parenting goes, I know the ropes pretty well.  And while I provide for my daughters aptly with the basics: food, water, shelter, etc.  I feel obligated and honored to show them new things, beautiful things, and give them a deeper appreciation for the world.  I want to expose them to things that will help them find themselves inwardly by what they experience outside in nature. 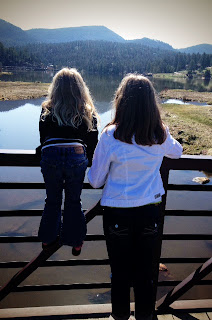 I've taken my daughters to the ocean several times and the forests and lakes of Minnesota at a family cabin.  I've seen their eyes marvel at the orange and pink sunsets that trace sparkles dancing across the surface.  I've heard them giggle and splash in the green foamy waves that crash up the shoreline their faces sprinkled with white sand from building castles and digging holes, their cheeks and noses kissed a rosy red by the sun.

I've watched them catch wriggling fish in the center of a pristine lake and watch bald eagles leave their nests, returning with prey for their newborn babies.  I've picked berries in the forest with them, shoving handfuls in our mouths, the juices running down our chins.  We've sat under the stars, fireside and cuddling - pointing to the only show we cared to watch - the one that nature was giving us over our heads.

Giving the gift of new experiences in new places to two girls who live in the land locked Midwest has been one of the greatest opportunities of my life as their mother.  And the ocean, the water, the outdoors is a place of peace for me.  A place where I feel small and insignificant, a place where I can be overwhelmed.  A place where I can marvel at how the world can be something so completely perfectly beautiful...and knowing I am a part of that.

But it was time for a new adventure. 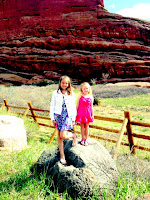 This last weekend Taylor and Cate were introduced to the mountains for the first time.  And as we drove from the airport seeing peaks seemingly small in the distance abruptly rising up all around us, they were in awe.  A new awe, one that marveled the carvings of the rocks, their complete and stark eruption from the ground, and the sweet smelling pines of Evergreen.  As we stood on a bridge at Evergreen Lake, all that rose around us was the magnificent mountains, large and looming, and full of green.  The awe from all the sounds of the animals who called this place home, and the bubbling creek that wove in and out of the park.  Their eyes were glued to the windows as we drove back down from Evergreen, winding through the streets, finally stopping for ice cream settling on a park bench beside a river. 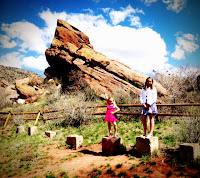 The new awe that came with the bluest of skies and the ruddy majesty of the looming rock faces at Red Rocks rising around them.  How every view was better than the last and they felt like they were higher than they'd ever been but still not high at all.  It was an awe of perspective; a new one they've never had that can't be explained, it just has to be seen with the eyes that evokes a quiet realization that has no need for words.  An awe beyond expression but completely understood somehow, even in the consciousness of a six and an eleven year old.  It something they'll feel again in their lifetimes, often I hope, that gives a sudden and overwhelming feeling of peace and of being connected to something.  Its in our DNA as humans. 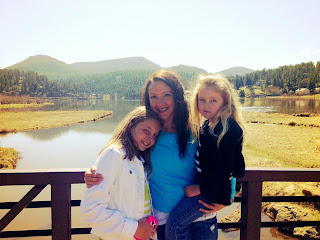 And it was such a short visit, more like a quiet introduction.  The trip was barely two days, not nearly enough time for them to discover more of the outdoors, to get their hands on the rock faces and explore this world that they never knew existed - a place they can miss and long to return to soon.  Because missing something  is a privilege.  It means that it matters and it might have even change us for the better.  And so the adventures for awe with my girls will continue... the search for someplace "new" that somehow feels like we've been waiting to find all along.