Life Lesson #23: Find (and Lose) Yourself in Learning 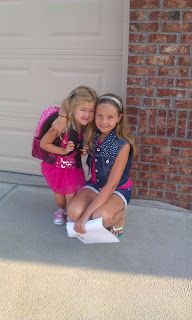 “Whilst I viewed those mountains, I felt a secret pleasure in finding myself so near the head of the-heretofore conceived-boundless Missouri. But when I reflected on the difficulties which this snowy barrier would most probably throw in my way to the Pacific Ocean, and the sufferings and hardships of myself and the party in them, it in some measure counterbalanced the joy I had felt in the first moments in which I gazed on them. But, as I have always held it little short of criminality to anticipate evils, I will allow it to be a good, comfortable road until I am compelled to believe otherwise." - William Clark 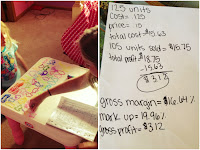 While the summer heat rages on and my children, who bore quite easily, crave the opportunity to be and stay busy, my goal is to make their activities meaningful and educational.  I am no heathen, it's fun education, but I don't want a summer hangover of learning waiting for them on the first day of school.

Last week, they were tasked with building a business plan for selling bracelets. They had to come up with a logo, tagline, and marketing plan. They successfully determined their start-up and projected sales. That project kept them busy most of a day and they really had fun with the tasks. 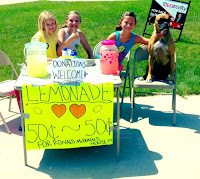 Another day, we did a lemonade stand for charity, the Ronald McDonald House. We set up a CrowdRise page click HERE, and raised well over $100.  We're taking the check to the local chapter next week after one more round of sales.

Taylor is taking a healthy cooking class at the local grocery store and Cate is going to a princess dance camp and they've had many a pool day with grandma and grandpa, but I have a big project up next for us.

This Friday, we're learning about Lewis and Clark!  Taylor loves history and Cate loves television, drawing, and field trips so it will be right up their alley!

Lewis and Clark are arguably two of my favorite writers, yes writers.  Adventurers and discoverers, they were both incredibly descriptive in their journals as they described and documented their epic journey across the United States.  Part of that journey was through our home state and so next weekend we'll be going to Lewis and Clark landing in downtown Omaha to see the Missouri River and walk across the pedestrian bridge.

To prepare for our homegrown field trip, the girls are going to watch two videos made by PBS about Lewis and Clark that I have watched. (Yes, while most people are watching reality television at night, I'm watching historical nonfiction and science shows on PBS.)  So, they will watch Part One and Part Two on Friday and Taylor will write up a paper on what she learned and Cate will be tasked with drawing pictures of what she watched.  We talked today about how they crossed the Rocky Mountains we had recently seen and Taylor is already getting her notebook ready to take notes.  Cate is excited that there will be bears in the video.

Lewis and Clark were the original gateway into the Western United States. On February 28, 1803, President Thomas Jefferson won approval from Congress for a visionary project, an endeavor that would become one of America’s greatest stories of adventure that involved the two explorers. Twenty-five hundred dollars were appropriated to fund a small expeditionary group, whose mission was to explore the uncharted West. Jefferson called the group the Corps of Discovery. It would be led by Jefferson’s secretary, Meriwether Lewis, and Lewis’ friend,William Clark. Over the next four years, the Corps of Discovery would travel thousands of miles, experiencing lands, rivers and peoples that no Americans ever had before. 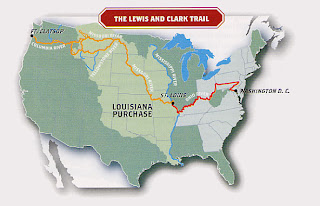 It's a complex, not entirely uplifting story that PBS covers with a vast array of experts and descendants of
those involved in the expedition wonderfully. Lewis, a tragic hero in this story was a  tortured introspective man who may have only been capable happiness on the trails and in the wilderness.  Their journey changed all of them, it changed our country... but it began with their willingness to go in the first place.

One of my favorite quotes Lewis offered on his 31st birthday, sitting alone at the headwaters of the Columbia River.  Haunting and sad, he reflected on his life thus far and the life he longed for.  Lewis never did find peace, but for a time, he had something that we all have to cling to... hope.

"This day I completed my thirty first year, and conceived that I had in all human probability now existed about half the period which I am to remain in this world. I reflected that I had as yet done but little, very little indeed, to further the happiness of the human race, or to advance the information of the succeeding generation. I viewed with regret the many hours I have spent in indolence, and now sorely feel the want of that information which those hours would have given me had they been judiciously expended. But since they are past and cannot be recalled, I dash from me the gloomy thought and resolve in future, to redouble my exertions and at least endeavor to promote those two primary objects of human existence, by giving them the aid of that portion of talents which nature and fortune have bestowed on me; or in future, to live for mankind, as I have heretofore lived for myself."  - Meriwether Lewis
Email Post
Labels: Corps of Discovery Lewis and Clark Lewis and Clark Trail PBS Ronald McDonald House