When it Rains, Sometimes the Falling Water is Sparkling

I arrived home this afternoon from an much-needed camping trip with my girls and one of my best friends and her kids.  It was an incredible few days and we celebrated Cate's birthday memorably with camping, swimming, sight-seeing, and nature walks.  (A blog to come soon on that front.)  I had a long to-do list after I put in a half day or work that involved laundry, getting a medical release notarized, dropping Taylor off at soccer, getting Cate ready for dance camp, and mowing the lawn.  I also needed to go to the store when I realized I had NO sparkling water in the house.  This is a problem.

I'm addicted to sparkling water.  I drink it all day long.  I had eight cans on our camping trip alone, and I love all the flavors.  (Though the new La Croix peach/pear is incredible.)  While on my trip, my friend Libbie posted a picture of slim cans of Perrier lime on Facebook and I wanted to try them!  After dropping Taylor off at soccer and getting two loads of laundry done, I put Cate in the car and we headed to Target.

An ominous flash of lightning struck overhead as we walked through the doors, and almost immediately my phone rang.  It was Taylor from soccer... they had called off practice and she was getting a ride home.  She was a few miles west and the storm there was heading our way fast.  I had to hurry and she didn't want to be home by herself.  I debated leaving, but I knew I didn't need too much, mostly produce and the water, so I told Cate we'd have to hurry and rushed inside.

We got our groceries, paid quickly, and I pushed the cart to the doors and looked outside.

It was POURING. Not the kind of rain that falls gently, but the sideways rain with thick drops that were going to get us, and our groceries, pretty wet before we got to the lonely Ford Focus I could see sitting alone at the back of the lot.

I did an inventory of the cart.  All told, I had four bags, two 8 packs of La Croix sparkling water, and one 12 pack of Perrier slim cans.  I wriggled my wrist a bit.  It's still sprained, in a splint, and sore after a lot of (probably ill-advised) use this weekend but the La Croix was light and Cate was with me so she could help.

What could possibly go wrong?

I grabbed the two LaCroix Water﻿ in my left side side, Cate grabbed three of the bags and my purse, and I grabbed the Perrier﻿ and final bag in my right hand. It was really coming down and with the lighting and flashes of thunder so close together, the storm was pretty close.  We were going to have to move quickly.  Luckily we were both wearing effective footwear... flip flops.  Yes, this was going to be totally fine.

"Mmmm hmmmm," she smiled up at me.

We took off running out the front door together and immediately felt the large drops splash on our clothes and faces.  Cate began to giggle, "The rain is on my cheeks, mama!" she squealed.  She stayed right beside me though, since I couldn't hold her hand and we slowed up to watch for cars, crossed the parking lot, and into the lane where we were parked.  No more than ten feet down the aisle, the box of Perrier completely came apart (it wasn't even that wet) in my hand as we were running and all the cans spilled out and spread all over the lane as we stood in the pouring rain.

I stopped and watched them roll away, some quite far, feeling the back of my shirt completely drenched, and said a bad word.  (Not the eff word, but a bad one none-the-less.)  This had better be good Perrier. 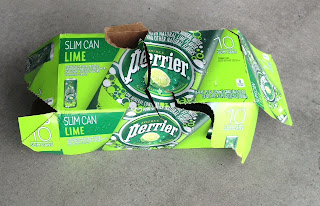 Watching it all happen was a couple in a small SUV who were driving up and in one swift motion he moved his car to the middle of the aisle so no one could get by, he and his wife hopped out and she moved Cate to the side to keep her safe and her husband and I and began chasing the cans that were now spread halfway across the parking lot.  We dropped them into the bags... one is still missing and one had a hole and had to be thrown away, but with their help within a few frantic minutes we were in the car, drenched to the core, down two cans of perrier, but on our way home.

Lessons:
1. Really, really kind people still exist and show up just when you need them.
2. Cate doesn't panic in a crisis, she laughs.
3. Perrier needs to construct a better box... but their slim can lime water is fabulous.