The Best Kind of Magic

Shortly after 9:30 AM this morning my grandfather's heart finally stopped beating.  I don't believe it gave out, I believe he decided it was time.  By his bedside was my grandmother, his wife of 63 years, his children, and his grandchildren.  He would make no sound as he left us, just silently passed; the room suddenly feeling emptier with him gone.  Though we have seen it coming, the grief is still crushing.  This extraordinary man who lay in the bed still wrapped gently in blankets, has meant so much to us all, and after 87 years on this Earth was gone.  The loss was immediately felt - the weight of our sadness could only be matched by the weight of our gratitude in having him in our lives.  For me, he has been so many things...
When I was a little girl, I believed that my grandfather was magic.  He could heal any boo boos with a Band-Aid, chase away nightmares with fish tales, was never without a piece or two of chocolate, and was the strongest, smartest, and funniest man I had ever known.  He was the best kind of magic, the kind you can't see working but you don't need to because you can feel it in everything he touched, so you know it must be true. I felt like maybe it would rub off on me if I was around him enough.

His eyes sparkled when he told jokes, which was often, and he was a "winker." No matter how much was going on, he could always catch my eye across a room and with a wink and a grin, I knew he was probably up to no good.  We had a lot of fun together gardening in his backyard, collecting alms at Mary Our Queen on Saturday night's at Mass, and in the dusky nights chasing fireflies in their backyard.  He'd help me put them into jars with holes poked in the top.  He always let them go after I fell asleep listening to one of his fishing stories, and he'd tell me in the morning that they disappeared on their own...I, of course, believed him.


He was always in the thick of things when our family got together. There were the Fourth of July's at his house when either he or my mother were the unwitting target of the pyrotechnics, the family dinners around my grandmother's beautiful table where he led grace, perfectly carved the turkey, and sipped on Manhattans.  There were the infamous Christmas gift exchanges in his basement and the constant talk of our beloved Green Bay Packers. 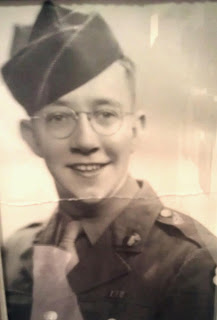 It wasn't until I got older that I learned more about his life as a man. He seemed to defy all odds, and there were many.  He was born with nothing.  Raised without privilege, opportunity, or example.  Nothing was handed to him, even as a child.  He grew up poor in Wisconsin, his father died when he was young leaving him without a male role model and he was raised mostly by an aunt.  No one would have been surprised if he wouldn't have amounted to much.  After all, he had nothing to start with.  On January 11, 1944 at 17 he lied about his age and enlisted in the Army, barely surviving his months overseas in France and Germany. He served his country proudly and fiercely but was gravely injured at the Battle of Spicheren Heights.  He arrived back in the states, still healing and with no home or place to call his own.  He had to rebuild his young life and very much alone.  Until he met my grandmother...

Their love story began when they were barely into their adulthood, though he'd already become quite adept at surviving harsh circumstances and uncertain futures.  He met my grandmother at a mutual friend's wedding, a sheltered but beautiful and feisty homecoming queen raised on a farm who knew very little about the war or what my grandfather had endured, but they quickly found their match.
The night they married, he took her, for the first time, to the home that they would share.  The first home he'd ever really known, something they would build, something that they would fiercely protect, even at the end.  For furniture, they had a single chair, but he would say it was the warmest comfort he'd ever experienced walking into that house that night.  And for her, he came to be the rock she'd depend on as she raised their family that began just 10 months after their wedding when my aunt was born.  Once again, he rose to the challenge.  No longer just taking care of himself, he selflessly began his role as their provider.  Despite their differences they were well-matched. Passing back and forth the needs and the burdens of one another, her giving him a safe place always to return, him giving her a constant means and an abiding reason to provide one.  Their precious home only existed because they made it together, for one another and for their growing family.


Working long hours, and traveling often, he took great pride in providing for their family that would go from one child to four.  If you look to them alone, you can see what legacy he began... of the four children, two are Doctors, one has a Master's Degree in Education and another an accomplished professional in business. Of those four children, six grandchildren were born.  Among them, a Doctor, a Nurse Practitioner, a Nurse Anesthetist, two MBA's and one more in his last years of college. Of those six grandchildren, he saw the birth of six great-grandchildren ranging in ages from 10 to nearly three.  Children who have happily delighted in his humor, kindness, and love, even coining his nickname of "papa" that we all used with such affection.

This family that he has built, brought together, and nurtured are all deeply bereaved at the loss of such a spark, of so many of the reasons why we are the people we are and why the love exists between us.  He was our foundation.  And for the last decade as he battled illness, injury, and debilitating pain, he survived in circumstances where so many would have succumbed.  He defied the statistics, the odds, and done so, because there was no place he would rather have been, than in the home and with the family that he created. Today, he finally let go. 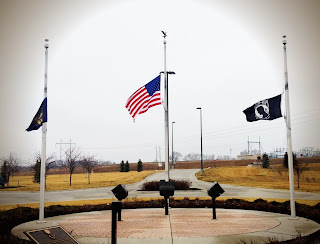 As my mother, uncle, and I left the VA today, where they had taken care of him as though he were family, I was immediately brought to tears at the sight outside.   In his honor, they'd lowered the flags to half staff.  For all that he has meant to me and my family, his service and sacrifice has touched countless more and I couldn't be more proud to be his granddaughter.  He is a man of no equal.

I choke up as I tell my daughters, two of his six great-grandchildren, of his passing as they returned home from school today.  Though youthful and innocent, their eyes well up, and they feel the sting of the news deeply.  Its nearly impossible to find the words to bring comfort.  Taylor collapses in my arms chest heaving, at nearly 11 she's had so many memories with him she'll cherish that now just feel like wounds. She can't even speak.

Then, quietly, small tears coming down her cheeks, my Cate asks, "But mom, how can we lose our Papa? He was just here yesterday."

How can you explain how a man born with nothing, given little more, can manage to leave so much good behind in his passing?  How a man who would never know the truest of love until returning from a violent front line nor a home until he'd long been an adult would be the one to provide us the greatest example of both?  Can you explain how a person could defy all the odds brought his way, and more than survive the carnage, but build something so beautiful in response?

I can't... though I suppose I am inclined to believe that maybe I was right about him as a child.  To me that sounds an awful lot like magic...the best kind of magic, the kind you can't see working but you don't need to because you can feel it in everything he touched, so you know it must be true.

[Writer's note: I would like to thank the Eastern Nebraska Veterans Home and the Visiting Nurses Association (VNA) for their incredible care of my grandfather in his last days.  Their regard for his comfort and security, his personal dignity, and with respect to his service and sacrifice was felt by our entire family and greatly appreciated during the difficult time.  Thank you for your kindness, sensitivity, and extraordinary care.]
Email Post
Labels: Veterans Home visiting nurses association VNA