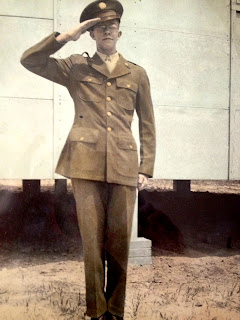 My hands were shaking so bad I sliced my finger open just trying to cut an avocado.  Ironically, the hands I sliced were just like his hands.  Long, slender fingers, but strong and durable.  I always loved his hands.  It was just another reminder.  One of many reminders that had been flooding my senses the last few days since my grandfather's passing.  Even then, I was wearing one of his favorite sweatshirts, and I hadn't put it away since I brought it home from his room at the VA.  Now, it was the morning of his funeral and it would be a long day of trying to say good-bye.

I picked the girls up from school and as we drove I prepared them for the day.  A funeral mass at my grandfather's beloved parish, a lunch with friends and family, and then a private family burial at the mausoleum with military honors.  I knew I couldn't be prepared for what the day would hold.  It would be the first time the girls would experience a funeral of someone so close to them. Despite being young, they were deeply affected and today we were acutely aware of all that we was losing.  Everything just ached.

As the family members had began to assemble over the past two days, we'd submerged ourselves in his life.  We all had something of our own we were losing and we shared it with each other: his wife - my grandmother, his children -my aunts and uncles, his grand children - my sister and cousins, his great-grand children - my daughters and nieces and nephews.  Around tables, couches, and in pews we'd told stories, dug out old pictures, reminisced on things almost long forgotten... we'd hugged, and we'd cried many tears.  We'd seen him in almost everything around us. Somehow, today, we'd all come together for him one last time to lay him to rest.  Somehow. 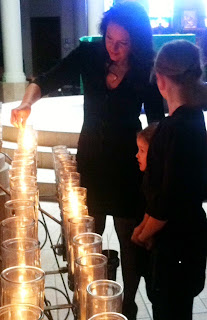 Funerals are always overwhelming.  Filled with ritual, tradition, and the pomp and circumstance of a loss so extraordinary, they necessitate these ornate ceremonies to make it feel like it's "enough" to honor a fitting good-bye tribute to someone we love. The religious would also say that they are meant to usher the person onto the next life, give them a restful peace in their passage, but for those who remain, they're meant to make us feel like we've gotten the chance to say all we can, cry the tears that threaten, and walk away from the loss we've just experienced with some kind of closure.

You can get lost in all the noise that happens on the day of a funeral.  But please, don't get lost in the rituals that you don't understand, the words you don't know to say, or the right times to do what you think might be expected of you.  Get lost in one thing only... the person who is gone.  Leave everything else outside the painful walls where you exist and don't expect any more or any less.  There's no such thing as "normal" except that it hurts.

Some rituals will hold meaning.  Find a place for yourself to connect into that meaning.  For me, the honor of carrying my grandfather is one I will never forget.  Alongside my other cousins, we served as his pall bearers.  Speaking in front of his family and friends, and having my girls say good-bye to his open casket before the funeral also meant a great deal.  The sight of Cate's small hand touching fondly his Green Bay Packer's tie that we chose for him to be buried wearing, tears in her blue eyes, and Taylor waving good-bye and whispering, "Papa, we miss you already," are images that will never leave me. 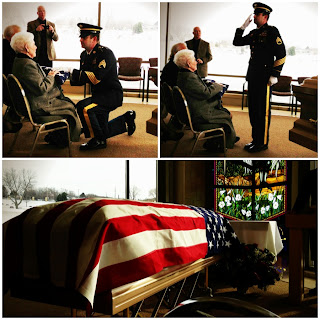 As a civilian, watching him receive military honors at his burial was extraordinary.  As a proud retired Army Captain,I knew what that would have meant to him as well.  The Military Rites were conducted by the American Legion Post #1, incredible men, who I spoke with before the hearse arrived.  They had buried five WWII Veterans this week alone, and somberly addressed us with respect and kindness.  During the ceremony, my grandmother was presented with the flag that draped his coffin, and as the gentle sound of TAPS began to play, just behind where I was sitting my uncle, an Army Colonel, and my cousin a West Point graduate and Captain himself, stood and saluted until the last of the gun salute receded into the background.  It was a respectful and dignified farewell. The flag is one that we'll always cherish.

You'll feel all manners of emotions.  Laughter inside an exhausting cry, thankfulness, humility, and despair.  You'll feel these moments apart, all at once, and without warning.  People will say things like, "He's in a better place" and "He was in so much pain" and "We should be celebrating."  And maybe you don't feel like celebrating.  Maybe you know that to be true in some part of your mind and maybe one day that thought might even bring you comfort, but maybe all you can feel in that moment is the gravity of the loss.  That's okay. 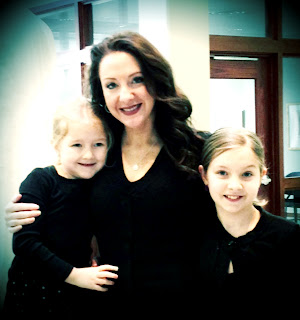 Don't dismiss those who seek to comfort you in word and action as you grieve.  The kind words in the receiving line, the unexpected flowers, the messages, phone calls, and texts, and the friends who won't leave your side... they can all help you heal.  Maybe the only thing harder than going through the experience of a loss is being outside the pain directly and watching someone you love endure something so difficult.  It's a language we all understand; loss.  Don't underestimate how much those things will matter when you find yourself alone.  Take the time to show those people gratitude, even when you're getting lost inside your own feelings.  Pulling yourself up and out of that place and into a place of thankfulness does lessen the sting and give you a gentle reminder of everything that still remains.

Above everything else, recall with as much affection as you can manage the things that haven't been lost in the passing.  Spending time with my family, I could see my grandfather in them all.  I have never been more grateful for their presence.  He's still there, in them.  In me. 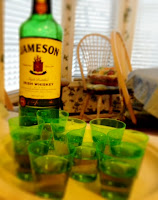 Loss is unavoidable.  It is a necessary part of life, and reminder of all the reasons why life is held in such regard.  To have much, must mean that there is place where there is nothing.  To love deeply is to recognize that there are places where love does not dwell.  To lose with such gravity dictates that what was lost cannot be calculated.  These are the hardest losses to bear.

In the past several days, we've grieved, honored, and been thankful for my grandfather's life.  We've done our best to say good-bye.  Raising a shot of Irish Whiskey after the funeral, "To absent comrades," we toasted his incredible life, a life we've all been fortunate to be a part.  Now it's on us to make sure that the years we have remaining are ones that would make him proud... ones that lead to a worthy good-bye of our own.