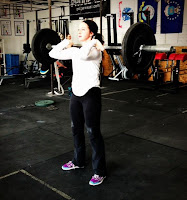 Okay, so in all fairness, my "heavy" is relative.  I'm not deadlifting 405lbs like Shelley.  I'm okay with that... but with two recent wrist injuries, broken thumb/tendonitis in the left wrist and then an untimely trip down my stairs for a nasty right wrist sprain days after my left one was cleared for training I'm missing throwing weights around. Like, a lot actually.

I've been doing CrossFit for well over a year and a half now.  And for a girl who couldn't do a pull-up when I started or add much weight to the bar for clean and jerks, overhead squats, or thrusters, mastering kipping pull-ups and watching the PR's stack up on my lifts (especially the Olympic ones) I've been thrilled with the progress and with my newly acquired strength and work capacity. 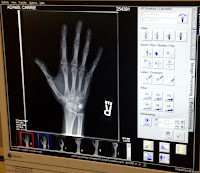 Training with one arm makes that more tricky, though modifications are abundant, I've had to go back to my endurance roots using single dumbbells, running, and body weight workouts in lieu of programming that involves barbells and low repetition maxes.

I'm finding that as much as I miss the weights, it's clear my long distance lungs have taken a hit and that's a tough pill to swallow.  Recent sprints were telling.  My splits were almost two seconds slower than they were a year ago on a 100m dash.  And so I find myself saying things like, "Oh I used to be a runner..." and "I'm not a sprinter..." but those just an excuse.  I'm still a runner and I used to be a really fast runner.  I've just been a neglectful one.  Earlier in the year when I ran a marathon for charity after the Boston Marathon bombing, it was rough back half.  The inspiration of why I was running made it 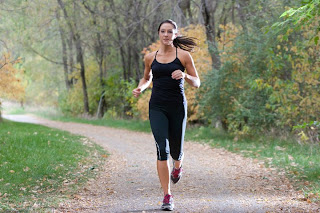 bearable but even then it was clear I'd lost a few steps.  So, now I'm gaining them back again.  But I'm not going to lose the strength.  The answer lies somewhere between the two.

And that's what is finding me lacing up my running shoes, yes running shoes, and logging the miles. And while the first few days were painful and awkward I am finding the rhythm again. There is no feeling like the feeling of the barbell, torn palms and all, throwing the iron around has an appeal that has become an unexpected pleasure... yet, the runner in me was there first and I'm getting the gentle reminder that it hasn't gone away.  Time to find the balance. There's nothing wrong with being strong AND fast; going heavy AND going long.
Email Post
Labels: Boston Marathon CrossFit Marathon