Okay, so I am about 22 days into what has been a very long and difficult month of adjustments to the new food routine. My last "official" update was at day 7.   I'm happy to report I'm finding my balance and I'm really making the food work for me and for the girls.  That's been a little tricky since they are such picky eaters.

I had to travel for work and spent three days in NYC and managed to not only stay inside the lines but find really delicious food as well.  The coffee situation in New York wasn't nearly as solid... there was an epic caffeine fail, but I'm back on track. To catch you up on the massive dietary overhaul, read THIS.

Suffice it to say, the caffeine has been the toughest part for me.  I'm drinking copious amounts of tea, and learning to appreciate it, but when I was in New York I think I had 11 cups of coffee in one day... yes, 11.  I suffered that night for it too!  That was some strong heartburn.

Not that it was something I was trying to do, but I'm shedding some pounds.  I assume it's more inflammation than anything else.  But at least six pounds are gone and I look leaner and longer (I was even told by a 12 year old yesterday that I have manly muscle arms).  I'm less hungry throughout the day and the Vegan protein I use now for post-workouts is not only growing on me in taste (it wasn't awesome at first) but it's really effective and I feel energized during my training. 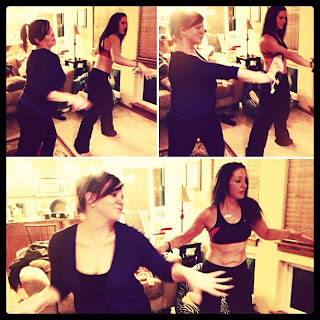 I'm running in a half-marathon in March so I started running again, in addition to the CrossFit I do every week.   I was almost certain I'd forgotten how to run when I got out for the first time in a few weeks and couldn't find my rhythm, but it seems to have kicked back in.  My gym is doing a fitness challenge and so I've had a lot of company with healthy eating and a good friend from Chicago even joined my specific diet temporarily as a generous act of solidarity. We'll see how long he lasts!

Some much needed Girl's Nights out and Wii Dance party sessions have kept my spirits up.  You know it's serious when shirts come off!

So, 22 days is in the books.  I'll keep updating every so often with how these first few months go.  Thank you again for all the texts, emails, and messages inquiring how I'm feeling and how things are going.  They really help me stay positive and stay on track.
Email Post